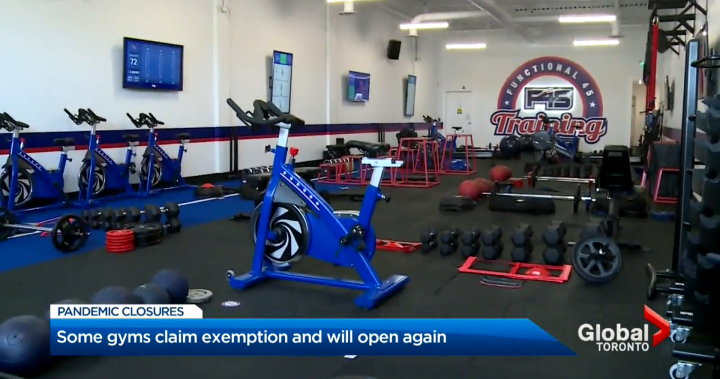 Days after the Ontario government reinstated restrictions that require most gyms to close, the franchise owners of at least two fitness studios in Toronto are set to reopen.

“Each studio has their own decision to make,” Cormier told Global News by telephone.

Another F45 franchise on Danforth Avenue also told members it would reopen to clients on the weekend.

A list of the new COVID-19 measures in Ontario

In an email sent to members, F45 Training Downtown Toronto advised it would be “opening under modified restrictions … that permit facilities to remain open during a lockdown in order to serve persons who experience a disability.”

“You have to sign a waiver saying you have a note” from a medical professional, Cormier told Global News, emphasizing that his studio would not require proof of any medical justification.

In its email to members, the F45 studio advised that there was no need to produce documentation in order to be allowed to work out at the studio.

“These letters will not be required to be seen by our trainers, owners, bylaw or public health and do not need to kept on you as that is in breech (sp) of your Human Rights,” the email reads.

“The government clearly permits it and many gyms are availing themselves of the exception,” O’Connor told Global News in an interview.

“It’s not a loophole … it could be a mental health illness, a physical health ailment, an injury…severe or less severe…it’s not a technicality, it’s legally provided for,” he added.

F45 Training, headquartered in Austin, Texas, gears its marketing to young, fitness-minded clients prepared to engage in high-intensity workouts. The company does not mention treatment for disabilities in any of its online marketing.

“45 is the total amount of time for sweat-dripping, heart-pumping fun,” according to the company’s website.

Global News sought comment from F45 Training but none was provided at the time of publication.

But the CEO of a Toronto organization that caters to those with disabilities is concerned that gyms trying to use the exemption may put other organizations at risk.

“We serve a community that needs us, and we need to stay open for that community,” said Karen Stintz, CEO of Variety Village.

The 70-year-old charitable organization in Scarborough operates a large fitness facility, including pools, a running track and custom-designed equipment built for those with physical and other disabilities.

About half of its members come from a wider community and are not eligible to use the facility at this time.

“Variety Village will only be open for members with disabilities only for therapeutic purposes,” according to its website.

Stintz says members without a disability have not attempted to continue to use the gym and swimming pool by attempting to make use of the current exemptions.

“When I think about other businesses that don’t actually serve a community with a disability but are trying to use this as a loophole to be able to stay open, I say it’s very risky,” she said, adding the government could rescind the regulation that allows it to stay open.

“From my perspective, we would ask very strongly that businesses don’t do that. If they are legitimately serving those with a disability, then they should stay open. If they’re using it as a loophole to stay in business that is doing a disservice to those who need it the most,” Stintz said in an on-camera interview.

Stintz said Variety Village wants to be sure that members utilizing the facilities during the restrictions are doing so in a bona fide way.

“We say to our members who have a disability, ‘You have to provide us with a legitimate doctor’s note,’” she said.

Cormier said his F45 studio is not the only Toronto gym that is encouraging members to use the exemption provisions.