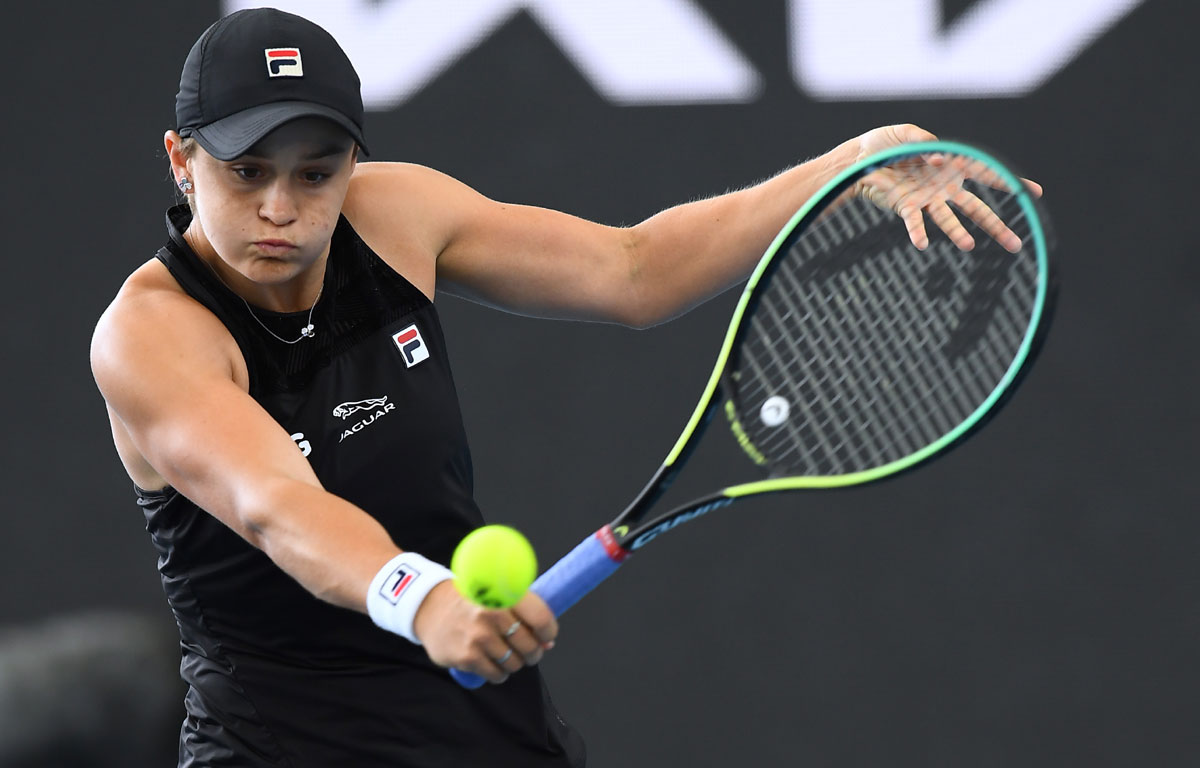 IMAGE: World No 1 Ashleigh Barty wrapped up the win over Sofia Kenin in just over an hour without facing a single break point. Photograph: Mark Brake/Getty Images

World number one Ashleigh Barty delighted the Memorial Drive crowd by breezing through to the Adelaide International semi-finals with a comfortable 6-3 6-4 victory over Sofia Kenin on Friday to set up a meeting with defending champion Iga Swiatek.

Barty, the 2020 Adelaide champion, dominated from the start and showed no signs of the rust on display in her win over Coco Gauff in the previous round of the Australian Open warm-up event.

In their first meeting since Kenin upset Barty in the 2020 Australian Open semi-final, the American struggled with her serve while her top-ranked opponent was nearly flawless, producing 17 aces and winning 31 of 32 first serve points.

Barty notched the crucial break midway through the opening set and carried that momentum through to the second, wrapping up the win in just over an hour without facing a single break point.

“I felt pretty good today. I was able to look after my service games pretty well and it was a lot of fun playing out here and getting more court time,” Barty said.

“It’s nice to come out here and be tested from the start and know that you need to bring your very best level. Looking at these last two matches, there’s still work to do.”

Former French Open champion Swiatek earned her spot in the last four in contrasting fashion after being made to sweat by twice major winner Victoria Azarenka in an entertaining 6-3 2-6 6-1 win that lasted nearly two hours.

The Polish fifth seed dictated play with her powerful forehand as she took the first set before Azarenka hit back in the second, taking advantage of Swiatek’s unsteady serve while advancing to the net at every opportunity.

But the 20-year-old Swiatek eventually pulled away in the decider as Azarenka’s movement was severely hampered by a right thigh injury.

The Belarusian later withdrew from her doubles semi-final — where she was partnering Paula Badosa — due to the injury, handing a walkover to Darija Jurak Schreiber and Andreja Klepac.

IMAGE: Elena Rybakina fought back from a set down to win her quarter-final against American Shelby Rogers. Photograph: Mark Brake/Getty Images

Earlier on Friday, seventh seed Elena Rybakina fought back from a set down to prevail 3-6, 6-3, 6-2 in her quarter-final against American Shelby Rogers.

Rogers, who knocked out sixth seed Maria Sakkari in the previous round of the WTA 500 event, raced 4-1 ahead before closing out a strong opening set but Rybakina got the only break in the second and carried that lead to force a decider.

Rybakina won 90% of her first serve points in the final set and sent down five aces en route to closing out the win in just over two hours. She will face either Japan’s Misaki Doi or Slovenian Kaja Juvan for a place in the final.

Four-times Grand Slam champion Osaka defeated Petkovic 6-1, 7-5 as the Japanese fought back from a break down in the second set, sealing the victory in an hour and 14 minutes at Rod Laver Arena.

The 24-year-old, who struggled for form last year since withdrawing from the French Open in May, will face third seed Veronika Kudermetova in the last four after the Russian beat compatriot Anastasia Potapova 6-2, 4-6, 6-0.

Halep looked in control during the first set but allowed her Swiss opponent back into the contest in the next and appeared frustrated at times in the decider, where both players freely traded breaks early on.

An error-prone Halep continued to struggle on her serve and smashed her racquet before breaking for a 5-4 lead and heaved a big sigh of relief when she sealed the win on Rod Laver Arena.

“It was really difficult,” Halep said.

“I didn’t trust that I could win the match, but I fought. She played unbelievable tennis so I’m happy I could be stronger in the end.”

Rafael Nadal’s hopes of getting some much-needed practice in before the Jan. 17-30 Australian Open were dashed when Dutchman Tallon Griekspoor pulled out of their quarter-final clash with an unspecified injury.

The Spanish world number six, who brought a premature end to his 2021 season with a left foot issue, beat qualifier Ricardas Berankis on Thursday before withdrawing from his doubles clash.

The 20-times Grand Slam winner will meet Emil Ruusuvuori in the semi-finals after the Finn eased past Alex Molcan 6-2, 6-1.

Spain, who went down to Serbia in the championship match in the inaugural edition of the team event in 2020, will meet either defending champions Russia or Canada in Sunday’s final.

Bautista Agut, 33, came into the match with a 2-0 head-to-head record against world number nine Hurkacz but had to dig deep to earn the victory after a high-quality match that lasted two hours and 44 minutes.

Hurkacz saved five match points, the first of them with an incredible low backhand drop volley that brought the crowd at the Ken Rosewall Arena to their feet.

But Bautista Agut kept putting him under pressure and then sealed the contest and the tie when the 24-year-old found the net with a return.

“It’s a match that I will always remember,” Bautista Agut said on court.

Poland were dealt a blow even before they took the court for the semi-finals with Kamil Majchrzak, who won all three of his singles matches at this year’s tournament, ruled out after testing positive for the novel coronavirus.

Jan Zielinski, who had never played a Tour-level singles match before Friday, replaced Majchrzak for the opening singles but he was no match for Pablo Carreno Busta.

Carreno Busta, ranked 20th, was unperturbed by the late change of opponent and gave Spain a rollicking start with a 6-2, 6-1 victory in just 53 minutes.

“When you expect to play against one player and at the last moment they change it, (it is tough),” the 2020 US Open semi-finalist said.

“They were unlucky, so sorry about that.

“But I had to do my tennis, my job and I think that I played really good, very focussed on my game. It’s important to always be one up (for the team).”

The former world number 10 is yet to lose a set and is also 4-0 — as is Bautista Agut — at this year’s ATP Cup which featured 16 teams and has $10 million in prize money on offer.