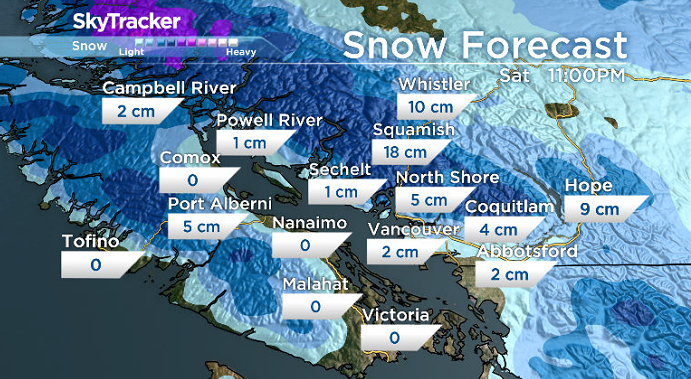 Wintry weather isn’t finished with the Lower Mainland just quite yet.

Despite warming temperatures after last month’s arctic blast and this week’s heavy snowfall, Metro Vancouver could still see another two to five centimetres of snow on Saturday morning, according to Global BC meteorologist Kristi Gordon.

More snow! 2-5 cm for Metro Vancouver Saturday. It will develop in the morning & then change to rain in the afternoon.
Still a risk of freezing rain in the Fraser Valley tonight, better chance of flurries. Snow will continue through much of the day Saturday. #BCStorm @GlobalBC pic.twitter.com/dqTBsd3USi

The snow is expected to shift to rain at some point in the afternoon.

The Fraser Valley, already grappling with ice across the region Friday, could see another round of freezing rain Friday night, followed by flurries.

Gordon said snow is forecast to continue through much of Saturday, with accumulations of between five and 12 centimetres possible.

In the Howe Sound and Sea to Sky region, between 10 and 20 centimetres of new snow is possible Saturday.

A winter storm warning remains in effect for the Coquihalla Highway between Hope and Merritt, with another 15 to 20 centimetres of snow possible Friday night.

That route, which remains restricted to commercial vehicles after November’s devastating storm, was closed for several hours Friday due to a crash, and reopened shortly before 7 p.m.

Drivers are being warned to expect congestion and hazardous winter conditions.

Highway 3 was closed overnight between Hope and Princeton for avalanche control.