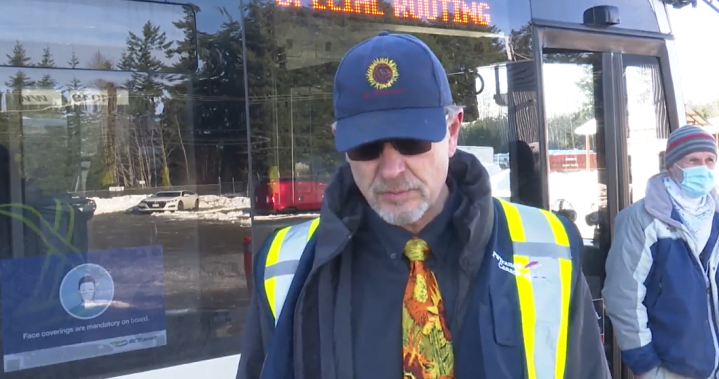 A well-known do-gooder in the Town of Comox struck again this week — this time, with an out-of-service bus and a team of volunteers to shovel the sidewalks and driveways of those in need.

JD Ludlow, also known as ‘The Flowerman,’ started putting the wheels in motion to obtain the bus from BC Transit weeks ago, and hit the streets on Thursday as the region was pummelled with more than 20 centimetres of snow.

“I thought, ‘You know what? I’m driving a bus — I can drive other shovellers around the valley to help out,’” said Ludlow.

“I wake up every day and think about how I can help others. That’s what motivates me.”

Ludlow, a bus driver himself, has been doing random acts of kindness — called “shenanigans” — in the region for years.

Examples include appearances at the annual Santa Parade, a pop-up travelling music show, and Lei Day, an initiative that encourages others to spread joy and kindness by draping them in his signature necklace of flowers.

For Thursday’s shenanigan, he recruited volunteers on social media, borrowed a bus from BC Transit, and surprised residents in need of a helping hand.

“It was unbelievable,” said one grateful recipient. “I’ve had two major operations over the past year — a heart operation and a cancer operation. My neighbour helps me with the driveway and we were struggling, so it was a bit of a Godsend to see these guys coming.”

2:54
City of Vancouver puts out an appeal for snow angels

City of Vancouver puts out an appeal for snow angels

“When you show up at a person’s driveway in a city bus to clear the driveway and the doors open, you have a musician playing, well, this is right off the wall as far as community service goes,” said musician Collin Anthony Knight.

“We need to help our neighbours,” added Comox Mayor Russ Arnott. “You know, we’ve been talking about keeping safe for the last few years, but we also need to look out for each other in other ways, too.”

Jamie Weiss, a spokesperson for BC Transit, said the provincial Crown corporation was happy to do its part.

“All he needed from us was an out-of-service bus, and he did the leg work in talking to people and convincing people in the community to get out there and shovel sidewalks for people who couldn’t do it themselves,” he told Global News.

“Jamie Ludlow is just one of those people who makes the world a better place.”

Plans are already in motion to continue the good work — a passion of Ludlow’s.

“I’m grateful for what I have,” he said. “It may not be much financially, but I’m so grateful to help others and that’s what makes me happy.”