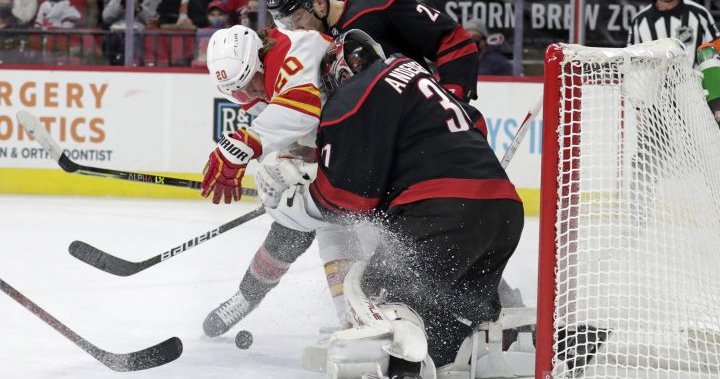 Andrei Svechnikov scored two goals and the Carolina Hurricanes returned to action after nearly a week layoff by beating the Calgary Flames 6-3 on Friday night.

Brady Skjei had a goal and two assists, while Derek Stepan, Jesper Fast and Tony DeAngelo also scored and Steven Lorentz had two assists for Carolina, which won for the ninth time in 10 games.

Blake Coleman and Matthew Tkachuk had a goal and an assist, and Johnny Gaudreau also scored for the Flames, who lost three straight for their longest stretch without a point this season.

Dan Vladar stopped 31 shots while appearing in back-to-back-games for only the second time this season after suffering the loss in Thursday night’s 4-1 defeat at Tampa Bay.

The Hurricanes hadn’t played since Saturday because of a postponement. They endured a ragged first period before Stepan, Svechnikov and DeAngelo scored in a five-minute stretch of the second to take a 4-1 lead.

Tkachuk scored his 13th of the season with 6:34 left in the second — less than a minute after DeAngelo’s goal, and Gaudreau cut Carolina’s lead to 4-3 with 11:03 to play.

Skjei scored with 1:52 left and Svechnikov got his second of the game and 12th of the season less than a minute later to cap the scoring.

Calgary had 21 shots in the first period, marking the most allowed in any this period by the Hurricanes. The Flames managed only 18 shots the rest of the way.

Yet Calgary’s 39-27 overall edge in shots meant the Hurricanes failed to post more shots on goal their their opponent for the first time in the last seven games.

The Flames dipped to 8-1-2 against teams from the Metropolitan Division with their first regulation setback in those encounters. They fell to Carolina in overtime last month at home.

Calgary also dropped to 3-1-1 in the second games of outings on back-to-back days.