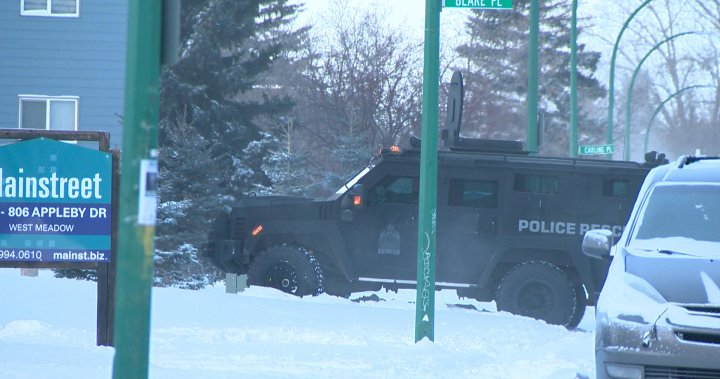 According to a police release, at around 3:45 a.m. on Wednesday officers responded to the 1600 block of 37th Street West for a weapons complaint.

It was reported that a 26-year-old man had threatened a 22-year-old woman with a gun and reportedly fled the scene in a vehicle, with a stolen wallet and cellphone.

With help from the SPS Air Support Unit, around 4:15 a.m. a vehicle matching the description was located in the 800 block of Appleby Drive, as well as two stolen vehicles.

Police learned that five people had gotten out of the vehicles and gone into a suite in the building nearby.

The Tactical Support Unit arrived to secure the scene and around 12 p.m. five people left the home and were arrested without incident.

According to police, a 26-year-old man is facing a total of 19 firearm possession-related charges in addition to charges of using a weapon while uttering threats, uttering threats to cause death, assault, two counts of possession of stolen property over $5,000 and breach of conditions.

A 25-year-old man and a 24-year-old man are also facing 19 firearm possession-related charges along with charges of possession of stolen property over $5,000 (two counts), and breach of conditions.

The 21-year-old woman was also charged with breach of conditions.

1:27
Nearly 80% of firearms involved in Toronto gun violence come from the U.S.: Police