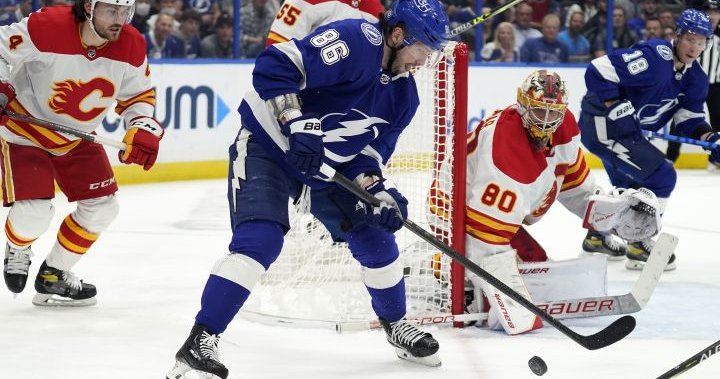 Nikita Kucherov had a pair of nifty assists in his return from a lengthy injury during Tampa Bay’s three-goal third period in the Lightning’s 4-1 victory over the Calgary Flames on Thursday night.

Kucherov, who missed 32 games with an undisclosed lower-body injury that required surgery, sent a pass through the slot from the low right circle to set up Point’s goal that put the Lightning up 2-0 2:52 into third. The right wing then made a spin move behind the net to assist on Palat’s low slot goal at 10:10.

Killorn made it 4-0 just 14 seconds after Palat’s goal.

Perry opened the scoring at 12:21 of the second.

Calgary right wing Brad Richardson was given a match penalty for an illegal check to the head on Mathieu Joseph with five minutes left in the second. Joseph was not hurt.

Tampa Bay outshot the Flames 14-8 and hit the post twice during a scoreless first period. Vladar made four saves, including Steven Stamkos’ drive from the left circle and Kucherov’s shot from the low right circle, during a power play late in the period.

Gaudreau appeared to make contact with Stamkos behind the net following Killorn’s goal that led to a scrum. There were three fights in the game.

Calgary forward Blake Coleman received his 2021 Stanley Cup ring from the Lightning before the morning skate and video tribute in the first period.

Coleman, a two-time cup winner with Tampa Bay, signed as a free agent with the Flames during the offseason. He had two goals, including the game-winner in Game 2, during Tampa Bay’s five-game final win over Montreal last July.

“We don’t win the cups without him. Brings back a ton of good memories but also some sad one’s in the fact he’s not here anymore.”