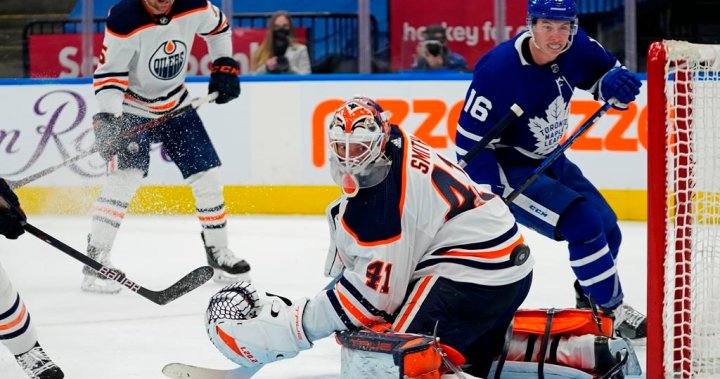 Mikheyev scored on a third-period power play as Toronto defeated the undermanned Oilers 4-2 at Scotiabank Arena. It marked the eighth straight game the Leafs have scored with the man advantage and the fifth consecutive contest Edmonton has allowed a power-play goal.

Mikheyev ripped his third goal of the season — and third in the last two games since returning from wrist surgery Dec. 14 — past Oiler goaltender Mike Smith’s glove at 11:25 of the final period on a man advantage. That snapped a 2-2 tie after Edmonton defenceman Slater Koekkoek put the puck right on the winger’s stick off a scrambled draw.

“If I have a chance for a shot, why not,” Mikheyev said.

John Tavares and T.J. Brodie also scored for Toronto (22-8-2). Jack Campbell made 28 saves as the Leafs improved to 20-4-1 over their past 25 games. William Nylander added two assists. Alexander Kerfoot iced it into the empty net and set up his team’s opener.

Tavares said it’s good to see Mikheyev getting back into a groove.

“It’s great to see him get some confidence and get rewarded,” he said.

Edmonton was minus captain Connor McDavid, fellow centre Derek Ryan and defenceman Tyson Barrie after all three were added to the NHL’s COVID-19 protocol. The Oilers were also without top-six forward Ryan Nugent-Hopkins (undisclosed), who has been placed on injured reserve.

The Leafs, meanwhile, had Auston Matthews in the lineup following a COVID-19 scare that kept him out of practice Monday and Tuesday.

Smith, who was out two months with an undisclosed injury, made just his sixth start of 2021-22 after sitting out the last two. That included Monday’s 4-1 loss to the New York Rangers that saw under-fire head coach Dave Tippett criticize fellow goaltender Mikko Koskinen’s performance.

“There was a lot of try in our game,” Tippett said. “We just couldn’t get that play made that makes the difference.

“It’s a game where every play counts. You have to get that play to put you over the top. They got it tonight, we didn’t.”

Wednesday’s date had been circled on the calendar not only because of McDavid’s yearly trip to Toronto — except for last season’s one-and-done North Division when Canadian teams played in a closed division — but also the return of former Leafs fan favourite Zach Hyman after he bolted to the Oilers in free agency.

The nationally televised game was instead played without the NHL’s reigning MVP and devoid of atmosphere — save for canned crowd noise — with fans barred from Scotiabank Arena due to provincial COVID-19 restrictions in response to the pandemic’s wave fuelled by the fast-spreading Omicron variant.

“I guess it could have gone either way after the second but we’re standing here again, leaving with no points,” Draisaitl said.

Toronto, which beat Edmonton 5-1 in the Alberta capital Dec. 14 before a coronavirus outbreak that impacted 14 players and seven team staff at its height, returned to action in impressive fashion with Saturday’s 6-0 victory over the short-handed Ottawa Senators.

Hyman spent six seasons with the Leafs, winning over fans with his grit, hard work and determination before the Toronto native signed a seven-year, US$38.5-million contract with Edmonton over the summer.

The Leafs opened the scoring at 4:25 of the first when Nylander’s shot off the end boards was tipped by Tavares and accidentally kicked into the Edmonton net by Smith. It was the Toronto captain’s 14th of the campaign as the Oilers surrendered the first goal for an NHL-high 24th time this season.

The visitors responded at 9:58 when Colton Sceviour found Perlini in front off the rush for his second.

Draisaitl then made it 2-1 just 1:14 later following some sustained pressure off a pass from Kailer Yamamoto to bury his league-leading 26th.

But the Leafs responded with 25.7 seconds left in the period when Brodie’s point shot hit the stick of Oilers defenceman Evan Bouchard for the blue-liner’s third of the season — and third in as many games.

The teams played fairly a low-event second until Mitch Marner hit the post for Toronto on a power play.

Edmonton’s Ryan McLeod then had a chance to give his team its first lead but didn’t realize he had Campbell at his mercy before sliding a no-look pass into a crowd before Smith denied Nylander on a breakaway to things tied heading to the third.

Notes: Matthews and assistant coach Dean Chynoweth both produced positive rapid COVID-19 tests Monday morning. Each tested negative on subsequent PCR tests and were cleared. … The Leafs open a four-game road trip in Colorado against the Avalanche on Saturday. … Edmonton winger Zack Kassian exited protocol in time to suit up against Toronto. … The Oilers are scheduled to host Ottawa on Monday when McDavid, Barrie and Ryan could be out of protocol.

This report by The Canadian Press was first published Jan. 5, 2022.