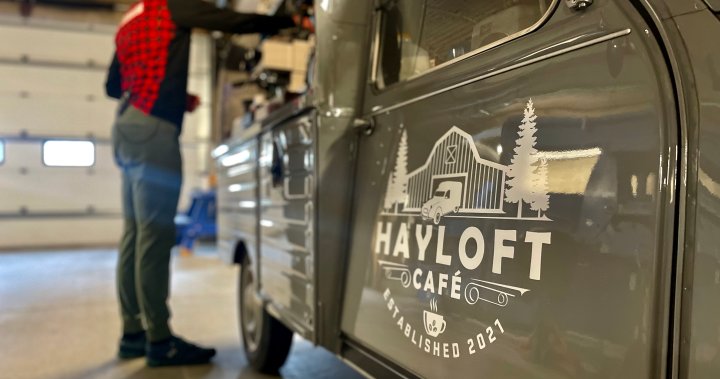 For the 24-year-old, chasing the Olympic dream is a full-time job and a costly one that doesn’t always pay the bills. He’s found himself working long into the night to support himself, sometimes at the expense of his training.

“Amateur sports are very costly. It’s not cheap to keep a roof over your head, to eat well, for equipment, travel costs, all that kind of stuff,” Mayeur said. “It adds up.”

“That being said, none of us do it for the money. I do it because I aspire to be able to wear the maple leaf on my back at the Olympics one day.”

The pandemic forced Team Canada to train solo for months on end.

During one long bike ride, a solution to his workload suddenly came to Mayeur.

Inspired by the team’s love of frequenting Calgary coffee shops and a desire to honour his french heritage, Mayeur and his father laid the groundwork for a mobile coffeeshop Hayloft Cafe in a matter of hours.

“Keeping it mobile cut away rent,” Mayeur explained. “Not even a month later, I was driving back from Vancouver with this truck on a flatbed.”

It took Mayeur the first year of the pandemic to fully outfit the truck with the necessary equipment, get the proper license from AHS and team up with Calgary’s Rosso Coffee Roasters top barista Cole Torode for a crash course in brewing the perfect cup.

“I had to actually make coffee for the whole warehouse team, which, for me, it was very stressful to have to make coffee for world-renowned coffee specialists. It was a stressful spot for me to put in. On top of that, I was serving them their own product,” Mayeur recalled.

He passed the test.

Instead of selling coffee cup-by-cup, Mayeur is booked for private events like weddings, open houses and corporate parties at a flat rate, giving him the flexibility to pick his hours with guaranteed income.

While the cafe has found great success in its first year, it is still a side hustle. Mayeur’s focus is on the ice, where he’s flourished as of late.

He captured a silver medal in the mass start and gold in team pursuit with Ted-Jan Bloemen and Kaleb Mullerat in the ISU Four Continents long track championship.

“The first time we had actually skated together as a three-man pursuit team was about two hours prior to that race, so we had a total of six laps under the belt as a team,” Mayeur said. “At the end of the day, we came away with the gold medal and the second-fastest pursuit time ever skated by a Canadian men’s TP team.”

Whether it’s Beijing or Italy 2026, if Mayeur gets that Olympic call, he’ll be celebrating with coffee, rather than champagne.