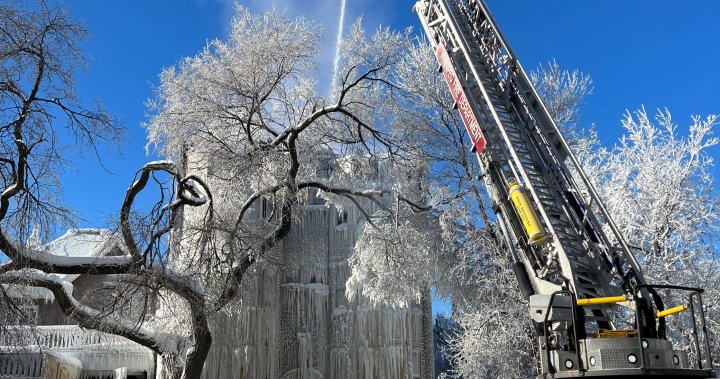 Several people are beginning the new year trying to piece their lives back together after fire destroyed an apartment building in the 400 block of Sherbrook St. in Winnipeg on New Year’s Eve.

“I lost absolutely everything. I even worked from home. All my clothes and everything,” said former tenant Karen Rice, adding she still has a few possessions that were in storage elsewhere.

“I didn’t have tenant insurance; my mistake. But it’s more the people, my friends and family, even strangers, that have been reaching out and helping me.”

Rice says two of her cats also perished in the fire.

“But the firefighters did walk out with Pepe, my tabby, my miracle right now, and also my chinchilla. A big firefighter carrying my chincilla, Caramel,” Rice said with a weak laugh.

Rice is one of several people who were forced from the building New Year’s Eve. The city says 14 of the building’s 16 suites were occupied at the time.

The city previously said paramedics assessed several people at the scene, but no one was transported to hospital and no injuries were reported.

Rice says the rental agency has made her a “top priority,” and on Tuesday, four days after the blaze, they had already shown her another suite she might settle into.

“It’s perfect, and they’re making it a very easy transition for me,” Rice said.

Director of marketing and communications, Swani Landry, says the organization rented out several suites for clients in the building.

“We’ve got everybody safe and secured in hotel rooms currently and we’re just wrapping them in compassion and supports and making sure they have everything they need,” Landry said.

“We as the renters have insurance, but that’ll be weeks, possibly months before we see anything come through for that.”

In the meantime, they’ve set up a relief fund for donations, which Landry says has seen an “outpouring of support” from the community.

The fund’s webpage says 10 people “lost everything but the clothes on their backs,” and they’re using the money to buy necessities such as clothing, winter gear, food, hygiene, household items, and to help cover the costs of being displaced.

The New Year’s Eve fire on Sherbrook was only one of several fires across the city, when temperatures were dipping well into the -30s and beyond.

“We always have to keep the water running,” Vanderhorst said.

“If we don’t keep that water running, lines freeze up, pumps freeze up and hydrants freeze up.”

All that extra water eventually creates ice across the area, not to mention on firefighters themselves, making slips and falls an added danger for crews and the public.

“The minute the water leaves the hose it turns into ice pellets, and that ice pellets (sic) can turn into hail or it can just coat a firefighter, coat your gear, coat equipment, breathing apparatus, face pieces, and cause significant challenges for equipment for firefighters.”

For those reasons, crews are often fighting the fire on rotation to give members a chance to warm up and dry off.

Vanderhorst says many of the most recent fires are still under investigation, but added the number of fires lately isn’t out of the ordinary.

That said, he adds the impacts to the community in the last week have been “significant.”