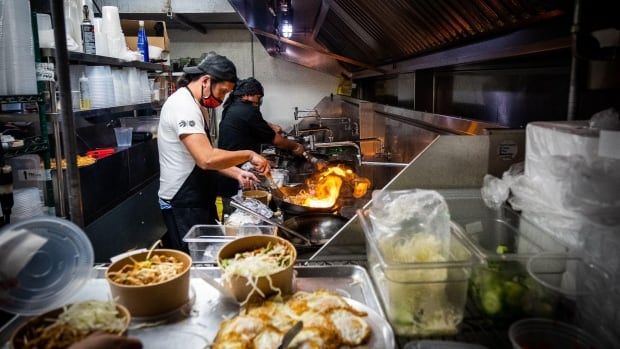 Beckta, a storied upscale restaurant in downtown Ottawa, was buzzing one recent day, but it wasn’t because of diners. The second-floor dining room was converted into an assembly line where staff were packing three-course dinners into paper boxes.

Dozens of these kits with lamb shank confit, prawn lettuce wraps and espresso tarts, along with a wine pairing, stood ready to be delivered to diners’ homes by one of the restaurant’s in-house drivers.

Beckta began offering them in May 2020. They’re such a big money maker that the restaurant cancelled its lunch service and reduced opening hours. It now operates five days a week and is employing a record number of staff.

It’s even made restaurant work, usually a gruelling affair with long hours, something with a work-life balance, owner Stephen Beckta said.

“For me personally now, my workday is probably eight to six most days,” he said. “I used to do a lot of nights in the restaurant, so I get to see my family a lot more than I used to.”

WATCH | How the pandemic is forever changing restaurants:

How the pandemic impacts the future of restaurants

Food transactions are at an all time high, according to Statistics Canada, yet brick and mortar establishments are vanishing. Judy Trinh takes a look at new restaurant business models, featuring a ghost kitchen and Canada’s first fully automated diner. 3:43

“We’re seeing specialized menus specifically for takeout. We’re seeing food that’s easier to make or have higher margins. These are efforts to encourage customers who can’t come to the restaurant.”

As the pandemic drags on with new virus variants and new restrictions send Canadians back into lockdowns, it’s changing the way restaurants operate and plan for the future, interviews with restaurateurs and industry observers say. And it’s heralding big changes to the dining experience, such as smaller restaurants, dedicated takeout counters, and a shift toward snazzier experiences to lure back indoor diners.

Restaurants are coming back … but differently

There’s good news for restaurants: after a brutal slump and many closures, country-wide sales were nearly back to pre-pandemic levels last summer. Limited-service restaurants, such as fast food and takeout counters, hit all-time highs.

But the costs of doing business also shot up. Appliances and ingredients are more expensive due to a global supply-chain choke. Providing workers with protective equipment and enforcing vaccine passports also costs money.

A severe labour shortage, especially in low-wage jobs, is also pushing restaurants to increase salaries and offer incentives to lure back waiters and cooks.

On top of that, Canadian restaurants have a combined $15 billion of debt from the pandemic, according to Vince Sgabellone, a food industry analyst for NPD Group, a market research firm.

“It’s a big hole. Restaurants were already a low-margin business, in the single digits. Now it’s even thinner,” he said.

Shifting to meal kits was so profitable for Beckta that the restaurant was able to offer paid sick days and benefits to employees after three months on the job.

“Everyone is upping their game from increased wages, increased benefits and just better working conditions. It’s wonderful to see because this was long overdue in our industry,” Beckta said.

But not every restaurant is in the same position, and many are saving costs where they can. In his surveys of sit-down restaurant owners, Sbegallone found that many are in no hurry to reopen for indoor dining.

“They say they’re doing okay with delivery, that it’s not worth rehiring staff. Why even bother with sit-down dining anymore?”

With a stronger focus on delivery and takeout, restaurants no longer have to rely on large spaces with many tables to make money. As a result, more restaurants are looking to smaller venues with cheaper rents, said Mancini, the bank vice-president.

This was already happening before the pandemic, but it turbocharged the trend.

“The need to have huge boxes was already less important,” Mancini said. “I don’t think it will go back to how it was before.”

A peek into this future is evident in downtown Toronto at Box’d, a concept for high-density office towers by Middle Eastern chain Paramount. Customers order with a mobile app and cooks prepare the food behind a wall of cubbies. Customers are notified when the order is ready and they grab their food from one of the cubbies. Throughout the whole process, the customer doesn’t talk to anyone.

Box’d owner Ahmad Daify calls it the first automated restaurant experience in Canada. He says he’s getting a lot of inquiries around the globe for franchising.

“Once there is some predictability in the downtown core, we would like to continue to expand the brand,” Daify said.

The ghost of kitchens yet to come

In a nondescript building on a drab street in Etobicoke is one of the hottest restaurant concepts. There are no tables, no wait staff, but it’s full of delivery drivers who watch a screen like an arrival board at an airport, waiting for their orders to ring up. Three dozen cell phones and tablets are constantly pinging, registering new orders from delivery apps.

Kitchen Hub is a ghost kitchen, a service that prepares food for other restaurants solely for delivery orders.

“We’re getting rid of a lot of the upfront headaches [for restaurants],” CEO Adam Armeland said. “We’re dealing with the infrastructure. We’re signing the lease, we’re financing, building everything out. All that they’re doing is bringing their chefs, their food and their brand.”

The company raised $10 million to expand this concept. The company’s goal is to open 50 facilities across Canada within five years, Armeland said.

This model will only become more popular, according to food industry analyst Sgabellone, allowing restaurants to serve customers beyond usual business hours.

“It caters to people wanting what they want when they want,” he said. “They’re enabled by digital orders.”

Luring diners with the experience factor

Does this push toward smaller restaurants that prioritize delivery over indoor dining sound the death knell to dining out? Hardly, analysts say. There will always be a place for celebrations and romantic dates.

But the dining experience won’t be just about the food. Restaurants, especially full-service, will have to stand out by offering other sensorial experiences, banker Mancini predicts.

“They’ll need to have an environment that’s engaging, whether it’s trivia night or a patio with games, or some kind of engaging activities inside.”

What’s happening with restaurants is, in many ways, what happened with movie theatres in the last decade as streaming services took over and large screens became affordable. Theatres had to offer an enhanced experience with rumbling chairs, 3D and immersive sound.

“When you’re at home, there’s a million ways to get good food,” Mancini said. “To encourage people to come out, you have to offer something they can’t get.”