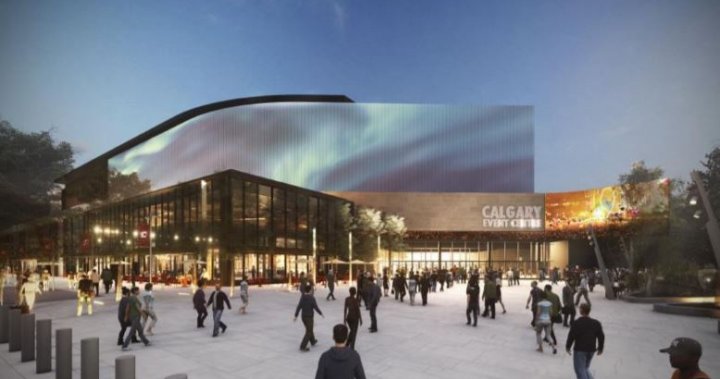 Alberta premier Jason Kenney said he is “very disappointed” the deal to build Calgary’s new event centre has officially come to an end.

Speaking at a provincial COVID-19 update on Tuesday, Kenney told reporters he was discouraged the City of Calgary “decided to change the deal at the last minute when construction was ready to proceed.”

“I understand the owners group pointed out they were facing pretty significant construction inflation.  The city’s response to that was to add even more costs and more delays,” Kenney said. “I think that’s really regrettable.”

Kenney’s comments refer to the projected additional costs of $16.7 million for things solar cells on the roof of the building as well as road and sidewalk issues. Both were part of a list of more than 70 conditions attached to the approval of the development permit by the Calgary Planning Commission.

At the time, Mayor Jyoti Gondek said the city could help with $6.4 million, which left $9.7 million for the Flames to cover.

It came after revelations the costs to build the arena had ballooned to $634 million which the Calgary Sports and Entertainment Corporation (CSEC) said were due to inflation as well as supply chain issues.

In July, the deal for the event centre was restructured to help to help cover increased costs and saw both sides of the deal agree to put forward more money with CSEC agreeing to cover any additional cost overruns.

Although CSEC stated its intention to pull out of the deal with the City of Calgary due to the rising costs, the agreement was officially turfed on Dec. 31, 2021.

Written notice was needed to proceed to the construction phase — which wasn’t given by the Dec. 31 deadline by either side — which resulted in the official termination of the deal.

“We have always believed that Calgary needs a new Event Centre,” CSEC president John Bean said in a statement on Tuesday. “However, under the current circumstances we do not see a path forward that would create a viable partnership with the city, which is essential for a new Event Centre to become a reality.”

According to Kenney, he spoke with several CEOs of “major Canadian companies” to promote investment in Alberta, and highlighted “all the great new amenities” being built in Calgary as part of his pitch including the events centre, the modernization of the Glenbow Museum and upgrades to Arts Commons.

“I do think that’s part of the broader package of an effort to get Calgary’s mojo back,” Kenney said. “I was encouraged the city and the owners’ group had come to an agreement, and I think it’s regrettable the city decided at the last minute to change the parameters.”

Mount Royal University political scientist Duane Bratt said the ongoing “finger-pointing” over the collapse of the deal isn’t coming as a surprise to him, but many are quick to blame Calgary’s mayor for the deal’s undoing.

To date, $23 million has been spent on the event centre project including $11.5 million from the City of Calgary, Global News has learned.

The Canadian Taxpayers Federation said the collapse of the deal is better for city taxpayers in the long-run, after a lengthy renegotiation that saw the city’s share of the project increase to $307.5 million.

“We don’t expect Calgary taxpayers to subsidize Walmart; we also don’t ask them to subsidize businesses like this,” CTF Alberta director Kevin Lacey said. “So this deal collapsing maybe in the long run the best case scenario for taxpayers.”

The event centre project was seen by many community advocates as a catalyst to redevelop the east end of the downtown core.

The Beltline Neighbourhoods Association president Peter Oliver said the collapse of the deal presents “a really great opportunity” to reimagine development in that area.

“There’s a lot of things you can build there other than an arena that would probably do a better job of attracting people to live downtown,” Oliver said. “There’s opportunity to put schools there, to put a new grand central park there, an urban farmers market.

“Really this is an opportunity for city council to go back and do the engagement that was rushed.”

Alberta’s premier noted he hopes the city and CSEC reconsider and “get shovels in the ground as soon as possible.”

“The project itself will help create jobs, which are much needed in this city,” Kenney said.

Mayor Gondek’s office declined a Global News request for comment on Tuesday but has previously said she is open to further discussions to reach a solution.