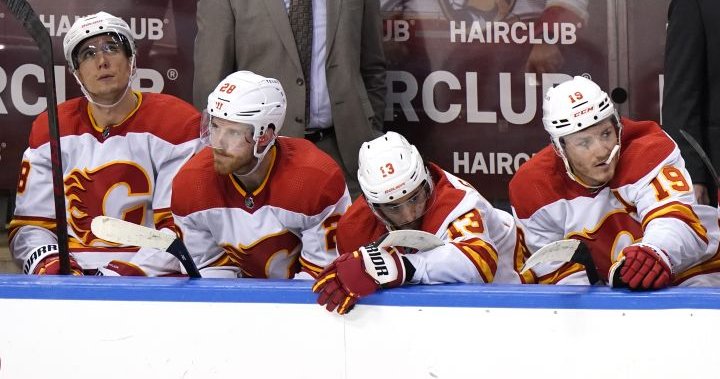 The NHL season isn’t even half over, yet Calgary coach Darryl Sutter has seen enough to offer big praise to the Florida Panthers.

Few would probably argue these days.

The Panthers are rolling again, and Sutter’s Flames were on the receiving end on Tuesday night. Patric Hornqvist scored twice, Sergei Bobrovsky stopped a season-high 47 shots and the Panthers pushed their winning streak to four games by topping the Flames 6-2.

“That’s a different level of team,” Sutter said after it was over and Florida scored the final five goals of the contest. “We’re not there yet.”

Joe Thornton got a history-making go-ahead goal late in the first period for Florida, which improved to 18-3-0 on home ice. Anthony Duclair, Ryan Lomberg and Lucas Carlsson also scored for Florida, and Brandon Montour had the second three-assist game of his career.

“It’s still early in the season,” Panthers interim coach Andrew Brunette said. “There’s a long way to go. But anybody that turns on a hockey game and watches the Florida Panthers play right now is going to be entertained… When we get wave after wave and get everybody rolling, we’re a pretty dangerous hockey team.”

Johnny Gaudreau got his 14th goal of the season for Calgary, and Blake Coleman also scored for the Flames, who led 2-1 early before the Panthers — now with 24 goals in their last four games — got rolling.

Carter Verhaeghe had two assists for Florida, which is now 19-0-0 when scoring at least four goals this season.

“You’re not going to win many games when you’re giving up six,” Calgary forward Matthew Thachuk said. “We left Marky out to dry on pretty much all of them.”

And for the 42-year-old Thornton, a deflection — a power-play tip of a shot by Montour — late in the first period for a 3-2 Florida lead only added to his resume. His first goal came on Dec. 3, 1997, and he has now scored in every calendar year since, 26 consecutive years and counting.

It was one of two power-play goals on the night for Florida.

“You give up that many goals, you’re not going to win,” Sutter said. “We had some defencemen that weren’t into the defending or checking part of the game and it cost us the hockey game.”

Bobrovsky’s previous high this season for saves was 43. It was the fourth time in his career that he stopped at least 47 shots — and ended the game stopping the last 41 shots that he saw.

“Bob’s great,” Lomberg said. “He played how he can. We’ve got all the confidence in the world in Bob and in our goaltending. It’s no surprise to us in that room when he makes big saves and does it time and time again. It’s no surprise. We see it every day from him.”

Calgary came into the game with a 9-2-2-2 record all-time when visiting Florida’s FLA Live Arena, the best mark of any NHL team when playing at the Panthers’ current home (excluding Seattle, which is 1-0-0 after winning at Sunrise earlier this season in its debut trip there).

That was a point percentage of .733. It’s no longer the best by a visitor to Florida’s rink.