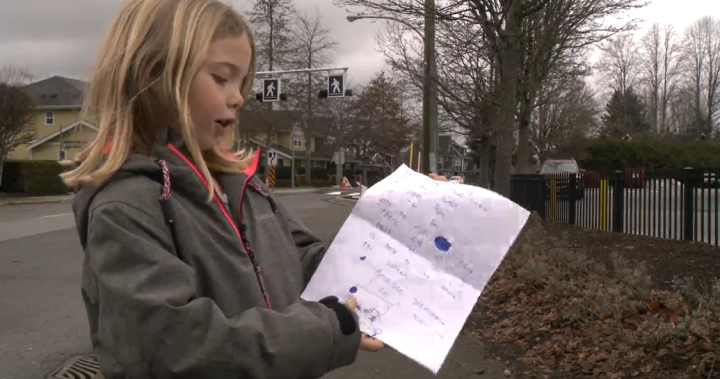 A young B.C. girl and her family are celebrating after she successfully petitioned the City of Delta to build a crosswalk outside her home.

Arianne Dieleman was just six years old when she wrote city councillors in the Lower Mainland municipality, asking them to make the roads safer at Central Avenue near Lions Park.

“Lots of people cross there and it is a busy road and it’s hard to see around the corner,” she said, reading from her letter.

The crosswalk on Central Avenue was completed last month — “fun,” said Arianne, who is now seven.

She said she wrote the letter last year because she and her brother were crossing the street and he was nearly hit by a car. She was worried people could get hit, “badly injured or even killed.”

“So asked my grandma … ‘Can I do anything about this, like make a crosswalk or something?’ She said I could make a petition about it.”

Arianne collected dozens of signatures from her neighbours and even supplied a blueprint for the project.

Traffic Tips: What to do at the scene of a crash

Dylan Kruger, a municipal councillor for Delta, said the council was “so impressed” by Arianne and the work she had done, it passed the request on to the transportation technical committee for review.

“We saw yes, there was a concern here, and it was addressed based on the merits of the project,” he said. “It was pretty incredible.”

Kruger said he hopes “we have a future mayor of Delta on our hands here,” adding Arianne is more articulate than some elected officials he knows.

‘All I want is a crosswalk’: B.C. business owner pleads with city after 7-year-old boy hit

Arianne’s mother, Carmelle Dieleman, said the project boosted her daughter’s confidence, and now Arianne has other projects in mind.

“She thinks she can do things and make a change now,” Dieleman explained. “She does have lot of other ideas and she’s always writing letters that she wants us to send to people.”

Members of the community have come up to thank her and the family, she added, upon learning Arianne is responsible for the crosswalk.

Asked what other issues she’d like to tackle next, Arianne suggested climate change.

“Maybe help stop global warming because it’s not good for things like Antarctica and the polar bears,” she said.

She said she has a lot of people to thank for her recent success, including her grandma, her friend Asha’s mom, her family, and all the signatories of the petition.