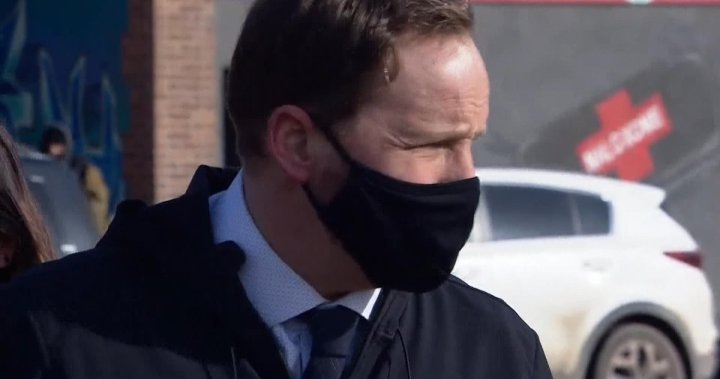 In light of record-breaking COVID-19 case numbers and test positivity rates released on Friday, Saskatchewan NDP Leader Ryan Meili is criticizing Premier Scott Moe for waiting until Tuesday for the next COVID-19 update and is calling on the Premier to scrap what the NDP is calling a “planned COVID-19 reporting blackout.”

The official opposition leader said the province is going “silent” in the middle of Saskatchewan’s Omicron surge over the New Year’s long weekend.

“It’s very simple: don’t take three days off in the midst of a surging wave of the Omicron variant,” Meili said on Sunday.

“We see cases rising, we see a test positivity that’s higher than anything we’ve ever seen in the province.

“We see what’s happening with hospitalizations, nearly 70 per cent across the country in the last few days. This is not the time to be going dark,” he added.

A record 735 new COVID-19 cases were reported on Friday with a test positivity rate of 26.3 per cent on just 2,819 tests, but with no hospitalizations.

The NDP is urging the Saskatchewan government to continue to provide daily detailed COVID case information in the lead up to kids going back to school.

Meili said with kids heading back to classrooms this upcoming week, now is not the time to be withholding important information. He also said the NDP believes the province is making a mistake by “watering down,” rather than “strengthening” public health measures.

“I was just speaking to a group of parents and they’re all trying to figure out what to do, can they get a hold of better masks for their kids? Should they keep their kids home a few more days?” Meili explained.

“Everybody’s in the dark, not only in the dark about the numbers and how quickly they’re rising, but also just what the guidance is from this government when it comes to schools,” he said.

Meili added other provinces in the country are not taking a break like this in releasing information and providing guidance on a back-to-school plan.

He also said other provinces are making plans around providing N95 masks or more medical grade masks, and more use of rapid tests. He’s deeply frustrated by what he calls a “business as usual” attitude being taken by the Saskatchewan government.

The NDP continues to call on the province to add additional public health measures on gathering sizes in order to keep the spread of the virus under control.

“As we know, those super spreader events are big, big risks,” Meili said.

He adds residents also need to feel sure they are completing rapid tests properly and demonstrating best-practices.

On Friday, the Saskatchewan government said if fully vaccinated and asymptomatic individuals test positive on a rapid test, they will not be required to get a PCR test to confirm the diagnosis and are required to self-isolate for at least five days.

PCR testing is still recommended for those who have symptoms, and priority populations like health care workers, long-term and personal care home residents and anyone who cares for vulnerable populations.

Meili said he finds what the government is doing right now to be “mind-boggling”, since when he looks across the country, he sees every other province bringing in additional science-based measures, and putting in heightened efforts to fight against the crunch, yet they’re still seeing hospitalizations rise acutely.

“Here they’re deciding to do absolutely nothing, sometimes it feels like we’re the we’re the guinea pig in a test, where we’re the only province that’s doing nothing at a time when we know you need to take action, you need to get ahead of this.

“You don’t wait till the hospitals are already full. We’ve seen Scott make that mistake before. We can’t do it again,” the NDP leader stated.

On Friday, the province released a statement from Moe saying that both Dr. Shahab and himself are expecting higher case numbers due to the contagiousness of the Omicron variant, but “the more important numbers” they are tracking are hospitalizations and ICU admissions.

“The Omicron variant is proving to be a more contagious but milder strain of COVID-19, especially for those who are fully vaccinated and have received their booster shot,” Moe adds.

He continues to write that if residents haven’t done so already, get vaccinated and get your booster as soon as you can.

The Premier is also urging residents to pick up a box of rapid tests and for individuals to test themselves from time to time, adding that there are plenty of vaccination appointments and rapid test kits available at several locations across Saskatchewan.

Data from the month of November shows death from COVID is approximately five times higher among the unvaccinated compared to fully vaccinated individuals.

The province is once again reminding people that being fully vaccinated and getting your booster greatly reduces the risk of contracting the virus, as well as reducing the risk of serious illness or death.

There are around 50,000 vaccination appointments available throughout the province until Jan. 31.

Residents can check the SHA walk-in clinics webpage for the most up-to-date details, including times and addresses of clinics in communities near them. Appointments can be booked online or over the phone at 1-833-SASKVAX (727-5829).