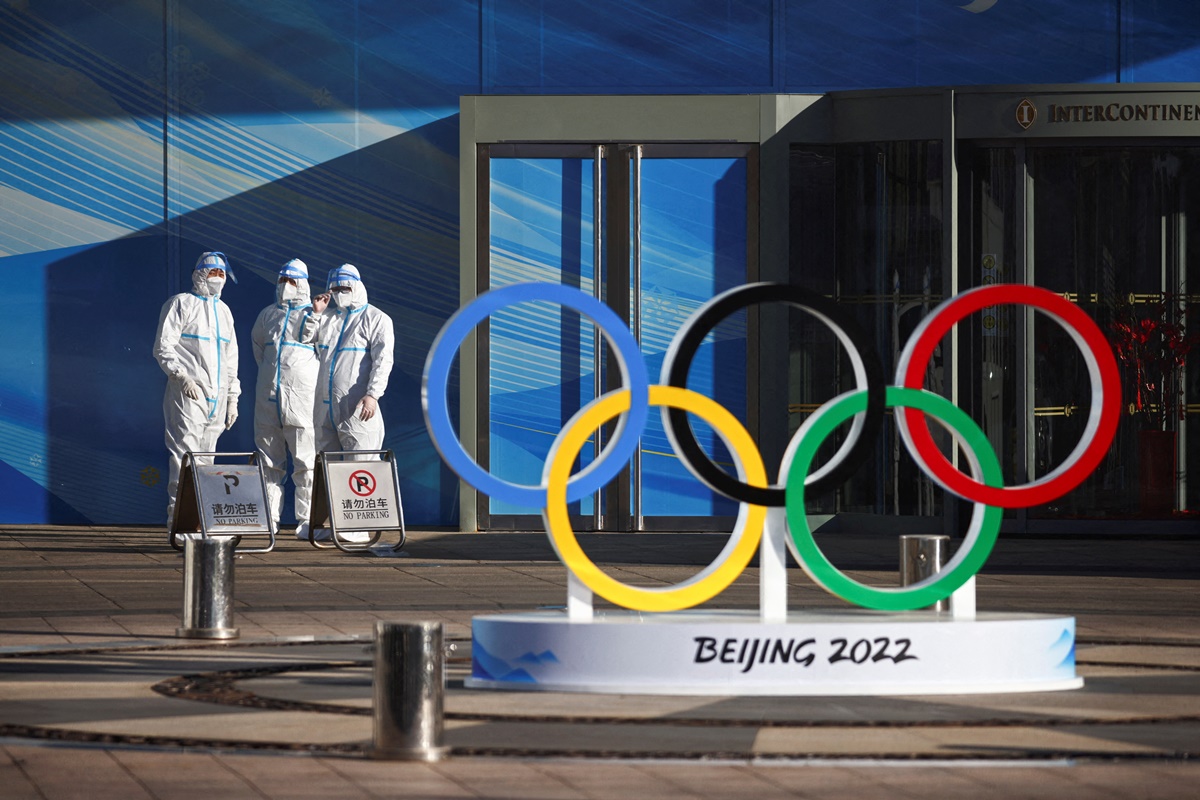 IMAGE: Workers in PPE stand next to the Olympic rings inside the closed loop area near the National Stadium, or the Bird’s Nest, where the opening and closing ceremonies of Beijing 2022 Winter Olympics will be held. Photograph: Thomas Peter/Reuters

China’s meticulous plans to prevent an Olympics-seeded COVID-19 outbreak by sealing all participants inside a ‘closed loop’ for the upcoming Winter Games will be tested by the emergence of the highly infectious Omicron variant.

The country has reported only a handful of Omicron cases and has largely succeeded in containing COVID-19 since it first emerged in the central city of Wuhan two years ago, thanks to a zero-tolerance policy that includes rigorous contact tracing, strict targeted lockdowns, and travel curbs that have drastically cut international arrivals.

But more than 2,000 international athletes are set to come to China for the Games that start Feb. 4, plus 25,000 other ‘stakeholders’, a large number from overseas. Organisers did not say how many of those people would be in the closed loop.

Organisers believe their measures ‘can ensure the Winter Olympic Games and the Winter Paralympic Games can be held safely and on schedule,’ Yan Jiarong, a spokesperson for the organising committee, told a news conference last Thursday.

Restrictions at Games venues in Beijing and Zhangjiakou in neighbouring Hebei province will be much tighter than those during last summer’s Tokyo Olympics.

Core to the planning is the rigidly-enforced closed loop that physically separates Games-related personnel from the local population, with overseas participants flying directly into and out of the bubble, which includes dedicated transport.

In Tokyo, which took place when Delta was surging globally, a bubble was strictly enforced, although local residents such as journalists and volunteers were able to enter and exit at will and some overseas visitors could leave it after being in the country for 14 days and repeatedly testing negative.

But Omicron, which appears to be much more transmissible than earlier variants, is now driving global COVID-19 infections to record highs and disrupting the sporting calendar.

North America’s National Hockey League, which has postponed 90 games, announced that it will not send its players to the Olympic ice hockey tournament due to COVID-19-induced scheduling problems. The CEO of the Canadian Olympic Committee told a broadcaster on Friday that he is increasingly concerned whether the Games can go ahead as planned.

“It is what I sometimes call a sprinter. It is extremely infectious and it is fast,” Irene Petersen, a professor of epidemiology at University College London, said of Omicron.

She said the UN climate conference in Glasgow this autumn showed a large-scale international event could keep transmissions to a minimum through lots of testing.

“But that was in the Delta era … we haven’t seen anything like the Omicron,” she said.

Games organisers say that test events held earlier this year involving some 2,000 overseas participants had shown Beijing’s COVID-19 measures to be effective. Beijing reported only a handful of cases among athletes during test events.

“The system is developed so that the chances of the Chinese people being exposed to the virus is minimised,” said Yanzhong Huang, senior fellow for global health at the Council on Foreign Relations, a US think tank.

Still, the risk will increase with the Olympics, he said, ‘not just because the Chinese people are largely quite vulnerable to these outbreaks because most people have not been exposed to the virus, but also because the Chinese vaccine has proved not very effective in preventing new infections’.

About 85% of the Chinese population have been vaccinated, mostly with Chinese shots manufactured by Sinopharm and Sinovac. All of the 20,000 or so Chinese volunteers and others who will enter the Olympic closed loop have been vaccinated. Efficacy readings in clinical trials for the Chinese shots ranged between 50% and 83.5% against symptomatic disease, below the 90%-plus figures for shots from Pfizer and Moderna.

Recent studies appear to show antibody responses from vaccines to be weaker against Omicron than earlier strains, but it remains unclear how the variant would affect their overall effectiveness.

As in Tokyo, no international spectators will be allowed at the Beijing Winter Games, and local attendance at event sites is likely to be curtailed.

Olympic participants must consistently test negative before being allowed to board specially arranged flights to Beijing. On arrival, participants must be vaccinated or face three weeks of quarantine. Everyone will be tested daily.

However, such tests cannot be relied on to detect cases during the virus’ incubation period, and organisers have acknowledged that they expect a ‘certain number’ of COVID-19 cases given the large number of international arrivals.

“If you’re going to use tests to exclude people who are infectious you will have to test them on their doorstep,” said Petersen of University College London.

Michael Baker, professor of public health at the University of Otago in Wellington, said the combination of travel from multiple countries and the concentration of athletes and staff poses difficulties exacerbated by the higher transmissability and shorter incubation of Delta and Omicron.

“Consequently, it will be difficult to contain outbreaks that occur during the Olympics, with the risk of transmission between Games participants and also into the wider community.”