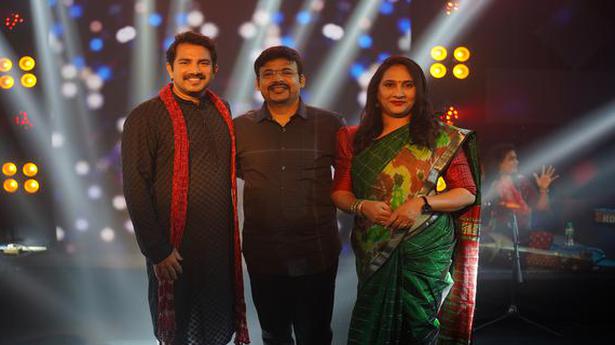 Brainchild of Mani Nagaraju, the show by Epictize Media launched by Hari B Damera and flautist Nagaraju Talluri gives a contemporary spin to the country’s musical heritagecelebratesrich in a contemporary way

Also read | Get ‘First Day First Show’, our weekly newsletter from the world of cinema, in your inbox. You can subscribe for free here

Conceived by Nagaraju’s wife Mani, a singer, ‘Raga Rasa’ is akin to MTV’s Coke Studio that created a niche platform for non-film music. Season 1 of ‘Raga Rasa’ featuring 10 episodes with 40 songs rendered by singers across India was shot recently at Picture Productions in Chennai. Mani says, “Our hunger to delight music lovers drives us to give the format a whole new beat,” adding that the visual elements aim to create a deeper content experience.

An advocate of Indian culture and values, Hari hopes Epictize Media will produce value-based content. “I love music so am glad that Raga Rasa is our first show,” says Hari.

With excitement palpable in his voice, Nagaraju says, “The onus is to package traditional songs such that even lay audiences can enjoy them.” Pointing to K Viswanath’s Sankarabharanam and Sagara Sangamam as examples, he says, “Thyagaraja’s kriti Brochevaarevarura has existed for 350 years, but the way it was presented in the movie Sankarabharanam popularised it even among people with no prior knowledge of classical Carnatic music. Adding contemporary elements in Sagara Sangamam enhanced the appeal of classical dance and made it interesting.” The production house’s journey took off when Hari produced an S P Balasubramaniam-tribute video by Nagaraju. Mani recollects, “We utilised the the pandemic time to enhance our music knowledge. Nag (Nagaraju) and Hari used to interact daily on compositions and different kinds of music. The duo shares the same values in life and music and decided to collaborate to showcase the country’s rich musical heritage in a contemporary way to draw the young generation towards Indian classical music.”

A wide array of songs

“Though we feature compositions by saints Thyagaraja, Purandara Dasa, Ramadasu, Annamacharya, Kabir and Meera Bai, this is not a devotional or spiritual show. Jazz drums and bass guitar are used to create a modern treatment in orchestration,” says Mani.

Citing an example of Aruna Sairam’s rendition of Aigiri Nandini, she adds, The song celebrating Durga was presented in a novel way on Coke Studio showing us how innovatively one can present mythological songs.” Nagaraju explains, “When singing chitta swaram by Satya Prakash, we used the flute in the background which makes the composition attractive and adds a new flavour.” The musical arrangement has been done by Nagaraju. “Modernizing the sound doesn’t mean we shock the audience with tunes. Nag has taken care not to go beyond raga boundaries so that the musical gems by yesteryear composers are not polluted,” says Mani.

The show starts with Indian music but the production house also has plans to go international and also make a web series.