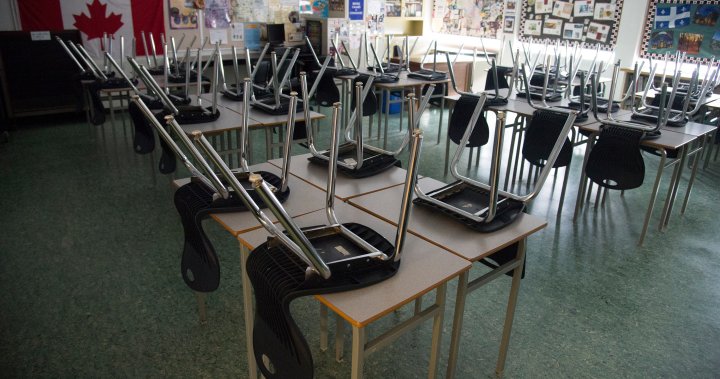 The Winnipeg School Division (WSD) is calling on the Manitoba government to make immediate changes to the return to school plan this month. The WSD wrote a public letter to the province asking it to review its plans in light of the skyrocketing Omicron cases.

The call comes as the Manitoba Teacher’s Society made a request to the province as well to move to remote learning for January.  However, with both urgent calls made, no changes have been announced as of yet and that has parents left in limbo waiting.

Stefany Theissen is a single mom with two kids. She says not knowing what’s coming, is the most frustrating part.

Her children are in grades 5 and 8 and both in French immersion – a language she doesn’t speak.

“For the last two years we’ve seen it go up and down and yet we’re still left waiting, still we’re left holding our anxieties and our fears for our kids, for ourselves, for our teachers, who are an extended part of our family.”

“My child has some disabilities that are really helped by a school environment,” says Brandes. However she says she torn on what would be best for him. “I would be concerned that he would not get the education that he deserves [at home], and yet I’m also still really worried because more than anything I don’t want my kid to get sick.”

“As much as I hate that [remote learning], I would rather they make a safe choice regardless of what that looks like so we can know and plan and just do that and get through this.”

Ideally she says she would like her kids to stay in school. “In an ideal world I would like to see our schools safe and see our governments not care what it costs to make them safe.”

“I don’t know where we’re going to be at January 10, but I want to know now what the choice should be, so that I can prepare.”

The Manitoba Teachers’ Society (MTS) is calling on the Manitoba government to move schools to Level Red.

The change would mean students would be required to switch to remote learning. MTS President James Bedford says he does not want to see hybrid learning arrangements instead of the consistency of entirely remote learning.

B.C. delaying start of school until Jan. 10 for most K to 12 students

“Yesterday, we communicated with government and called on the province to move to Code Red for the month of January. This would put remote learning in effect for students in the K-12 public school system,” said Bedford.

While he understands a classroom is the best learning environment for students, he says the health and safety of students and teachers takes priority.

He’s also asking the province to provide N-95 masks for all education staff working in schools during remote learning.