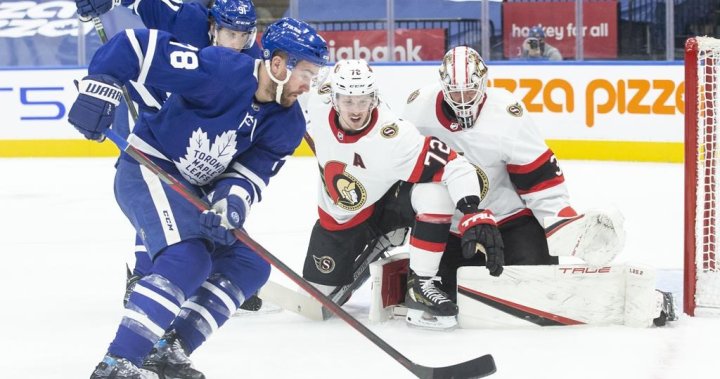 Toronto filled the net ­– and there weren’t any fans in the building to see it.

Justin Holl and Ilya Mikheyev scored shorthanded on the same penalty kill for their first goals of the season Saturday as the Leafs thumped the Ottawa Senators 6-0 in both teams’ return to action following the NHL’s extended break inside a Scotiabank Arena devoid of spectators because of new provincial COVID-19 regulations.

Jack Campbell made 23 saves for Toronto (21-8-2) to register his fourth shutout of the campaign and push the netminder’s career total to eight.

William Nylander added two late goals, Mikheyev scored his second in the third period, and T.J. Brodie found the back of the net and added two assists for the Leafs, who played for the first time since Dec. 14 because of a coronavirus outbreak that impacted 21 people in the organization at its height. Alexander Kerfoot added three assists.

“We absolutely love our fans,” Campbell said of looking up at the empty stands that harkened back to last season’s Canadian-based North Division that didn’t see paying customers in seats until the playoffs. “(But) we got to play some hockey … everybody was super pumped.

Matt Murray stopped 34 shots for undermanned Ottawa (9-18-2) – the Senators currently have six players in the NHL’s COVID-19 protocol – in the struggling goaltender’s first appearance with the big club since being demoted to the American Hockey League for a month to work on his game.

The Leafs and Senators returned to action for the first time since the league’s expanded schedule pause over the holidays in response to the pandemic’s fourth wave fuelled by the fast-spreading Omicron variant.

Toronto, which last suited up in a 5-1 victory over the Edmonton Oilers almost three weeks ago, had a high-water mark of 14 players and seven staff members, including head coach Sheldon Keefe, in protocol following its outbreak.

Leafs defenceman Jake Muzzin didn’t dress after practising Friday for the first time since leaving isolation, while fellow blue-liner Timothy Liljegren is the only Toronto player still in protocol.

Star winger Mitch Marner actually benefitted from the long break, returning to the ice Saturday for the Leafs after missing only six games with a shoulder injury suffered in practice Dec. 3.

Ottawa was shut down earlier this season because of its own outbreak, resulting in three postponements, and currently has those six players in protocol, including five announced since Friday – No. 1 centre Josh Norris, wingers Tyler Ennis and Nick Paul, and defencemen Dillon Heatherington and Jacob Bernard-Docker.

Smith and an assistant were also recently in protocol, but exited and rejoined the group earlier this week. Ottawa’s last game before the break was Dec. 18, a 4-3 overtime loss to the Philadelphia Flyers.

Saturday’s contest was played without fans after the Ontario government announced Thursday attendance at indoor events would be capped at 1,000 spectators or 50 per cent – whichever is less.

“It’s an adjustment again, for sure,” Keefe, whose team was sixth in scoring with 186 goals in 56 games last season, said of the empty rink. “We’ve been through it, so I don’t think it’s as much of an adjustment for the group, but we missed the fans out here.

“As much as I was happy with our players’ engagement in the game, I don’t think the game itself had a whole lot of emotion or energy or competitiveness, physicality – all those things and that tend to ramp up when the fans are in the building.”

The province previously cut capacity limits to 50 per cent, but Toronto’s home games Dec. 23 and Wednesday were postponed due to the team’s outbreak.

Maple Leaf Sports & Entertainment, which also owns the NBA’s Toronto Raptors, subsequently said it would operate without sold tickets for games, save for league and team requirements, for the next three weeks.

“We’re sort of used to it,” Brodie added. “The hardest thing was just being off for so long, not being able to come to the rink. Then practising for four or five days before … you add the (no) fans to that, you don’t really know what to expect.”

Blue tarps used throughout 2020-21 were back over a portion of the lower bowl behind the benches to provide a more esthetically pleasing backdrop for TV viewers.

“It was a lot like last year,” Holl said. “One of those games where you have to form your own energy and create your own juice.”

Murray and his teammates weathered two early Toronto power plays, including a couple nice stops on Jason Spezza, as the Leafs led 8-0 in shots.

The Senators got a man advantage of their own later in a first period where they barely touched the puck, but the home side struck twice while shorthanded.

Brodie made a nice play to intercept a pass to send Toronto the other way on a 2-on-1 rush before David Kampf fed Holl for his first goal of the campaign at 14:06.

The defenceman’s first goal since March 25, 2021, also came with both his nostrils plugged with gauze after he took a skate boot to the face earlier in the period.

“We don’t score very often,” Holl said with a grin of Toronto’s blue-line corps. “When you do get on the Jumbotron, and my nose is double-plugged, it’s kind of funny.”

That breakthrough had yet to be announced inside the cavernous building when Mikheyev, who made his season debut Dec. 14 due to a thumb injury, moved in alone on Murray and fired his first just 27 seconds later.

The goals matched a franchise record for the fastest while shorthanded, a mark set by Borje Salming and Greg Terrion on Nov. 16, 1986.

Campbell didn’t have a lot to do at the other end, but stopped Alex Formenton on a nice rush in the second period before Murray denied Leafs captain John Tavares, who played the 900th game of his NHL career, and Auston Matthews on Toronto’s fourth power play.

But Brodie eventually made it 3-0 at 7:18 on a wraparound effort after Murray made the initial save.

The Toronto defenceman then helped out his goalie by tying up Formenton on Campbell’s doorstep and a puck loose in the crease to keep the lead at three heading to the intermission.

Nylander buried his 14th on a breakaway with 6:19 left in regulation before Mikheyev added his second of the night on a power play just 1:01 later. Nylander rounded out the scoring with 2:46 remaining on the clock on a blast through a screen from distance.

“It was an impressive game by the boys in front of me,” Campbell said. “They were playing super fast and just doing everything coach talked about.

“Fun time out there and great to be back.”

There only one thing missing­ – the fans.

This report by The Canadian Press was first published Jan. 1, 2022.

Nylander lifts Leafs past Golden Knights in SO