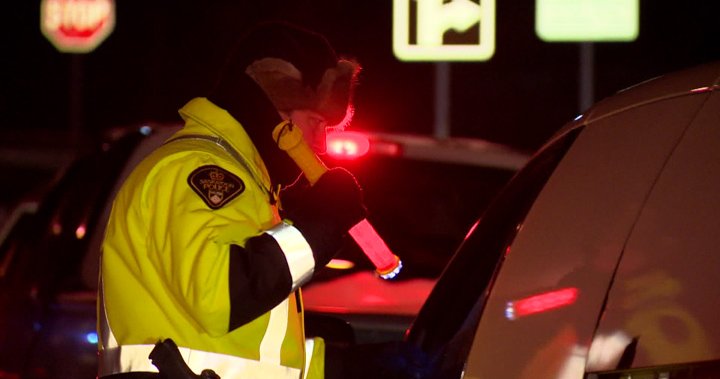 New Year’s Eve is the time to get together and celebrate. However, before the fun comes safety.

The Saskatoon Police Service‘s (SPS) traffic unit has been conducting its sobriety checkpoint campaign throughout December, aiming to get impaired drivers off Saskatoon roads.

“Patrol units and our traffic officers are always keeping an eye out for anyone who’s driving in a manner that’s less than perfect,” said Staff Sargent Patrick Barbar with the Saskatoon Police Service.

Inspectors will be checking to ensure Ontario bars close at 11 p.m. on New Year’s Eve

Between December 1-25, nearly 50 people were caught driving under the influence.

“We will be conducting a sobriety checkpoint with our policing partners from the RCMP, and we will be testing for both alcohol and various drugs including cannabis.”

An SGI spokesperson, Tyler McMurchy, said there are many ways to avoid turning a fun new year’s party into a scary or sad situation.

“There’s never a good reason to drive impaired, so we want people to think about what their reasons are, and that’s why they should always plan a safe ride.”

Saskatoon has many services for people to utilize, such as cabs, public transit and vehicle pick-up companies.

Numbers throughout 2021 have dropped by almost half compared to the previous year.

“It’s heartening to see how many people are now using designated drivers and taking advantage of all the other options that exist in a big city like Saskatoon,” said Barbar.

Police will have very visible checkpoints set up around the city.

There will also be unmarked vehicles near high consumption locations such as bars and event venues to enforce a safe New Year’s Eve.