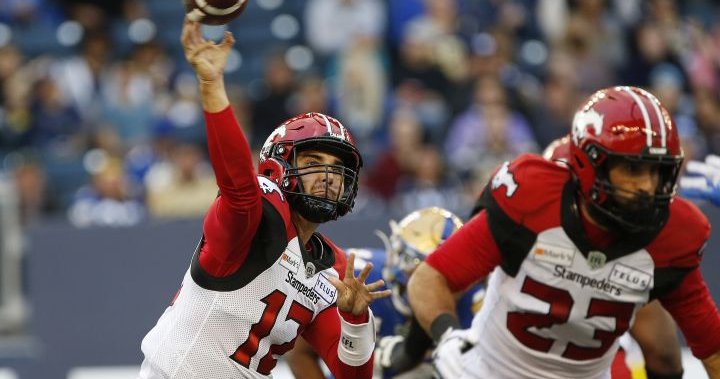 Maier played 11 games for the Stampeders during his rookie CFL season in 2021 and made three starts. He completed 95 of 148 passes (64.2-per cent) for 1,211 yards, five touchdowns and three interceptions.

He had three 300-yard passing games and was the first player in CFL history to crack the 300-yard milestone in each of his first three starts.

Maier also carried the ball 16 times for 31 yards and two touchdowns and made one catch for six yards.

Maier won his CFL debut in Week 3 in place on an injured Mitchell as Calgary beat Montreal 28-22.

He set a franchise record the following week by completing 17 consecutive passes in an 18-16 loss at Winnipeg.

Making his third start on the final week of the season, Maier he helped the Stampeders rally from a 12-point deficit with five minutes remaining for a 13-12 win over the Blue Bombers.

“Jake showed great promise during his rookie season and made a remarkably rapid adjustment to the Canadian game,” Stampeders president and general manager John Hufnagel said in a statement.

“I look forward to seeing him continue his development next season.”

Watch below: (From Aug. 23, 2021) 770 CHQR Voice of the Stampeders’ Mark Stephen joins Cami Kepke to break down Jake Maier’s debut, defensive line injuries and a big test ahead.

4:23
Stamps Talk: Stephen sounds off on eventful Week 3 for the Calgary Stampeders

Stamps Talk: Stephen sounds off on eventful Week 3 for the Calgary Stampeders – Aug 23, 2021