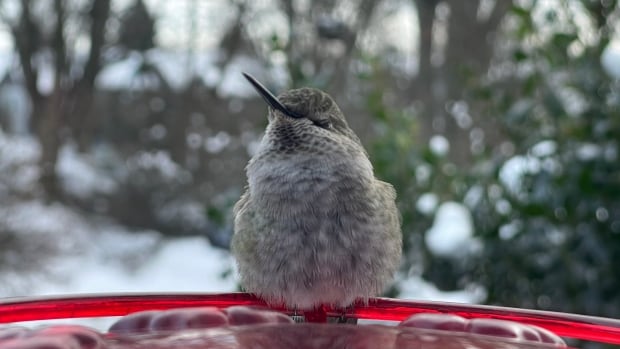 The extreme cold snap is taking a toll on British Columbia’s littlest bird.

Fifteen frozen or injured Anna’s hummingbirds were brought to the non-profit Wildlife Rescue Association of B.C. facility in Burnaby, B.C., on Tuesday alone, a record number for a single day.

Staff also said the phone has been ringing off the hook with people wanting advice about what to do with hummingbirds they’ve found that appear to be hurt.

“Since the temperature dropped, we’re seeing all kinds of injuries from them being frozen in snow banks, sometimes actually getting their tongues frozen to bird feeders or even their feet or wings frozen to different surfaces,” said Jackie McQuillan, support centre lead at the Wildlife Rescue Association of B.C.

“They’re hypoglycemic, so their blood sugar levels have dropped really low. They’re incredibly weak,” she said. “Many of them have frostbite, and they need a lot of help.”

McQuillan said the tiny birds can be rehabilitated as long as their injuries aren’t too severe.

And in some cases, hummingbirds that seem close to death are actually just fine — having gone into a natural state of torpor that helps them survive freezing temperatures, assuming a cat doesn’t get to them.

“It’s kind of like a semi-hibernation, where they slow down their metabolism to conserve energy,” McQuillan said. “So people will often find them during a cold snap in this sleepy state.”

My hummingbird died last night and I’m devastated. He’s lived in our yard for six months, buzzed me many times while changing his feeders, and because the centre of our life sitting at the kitchen table. We put out fresh nectar at 6:30 but he died anyway. <a href=”https://t.co/0xh2HAfFQb”>pic.twitter.com/0xh2HAfFQb</a>

“Put it in a little box, keep an eye on it, check every half hour, but keep it outside so that if it flies away, you’re not trying to catch it in the house.”

The Anna’s is one of five hummingbird species in B.C., but the only one that doesn’t migrate in winter.

The breeding season for the Anna’s hummingbird begins in January, which is another reason people with sugar water hummingbird feeders need to pay close attention in the coldest months, so good intentions don’t end up hurting the birds.

“You need to be really diligent about keeping those feeders from freezing,” McQuillan said.

Freezing feeders can also harm hummingbirds by changing the concentration of sugar to water.

“Ice excludes sugar, which means that the remaining mixture gets more and more concentrated,” Moran said. “And the reason this is a bit of a problem is because then when it’s really cold, they need to find water to dilute that. And if all the water’s frozen, there’s no free water around.”

Since the cold snap hit almost a week ago, creative suggestions around how to stop hummingbird feeders from freezing have been widely circulating on social media — featuring everything from wool socks with hand warmers stuffed inside to Christmas light wraps and lamp contraptions.

McQuillan says it’s best to position your feeder in a protected place, out of the elements and close to your home.

Another strategy is to have two feeders, keeping one in the house, full and ready to be swapped in when the second one outside freezes.

When it comes to filling your feeder, Moran advises that it’s best to stick with the recommended one part refined white sugar to four parts water mixture. She even suggests an easy trick to remember the proportions.

“The recipe is on your hand,” she said. “Your thumb is the sugar and your fingers are the water.”