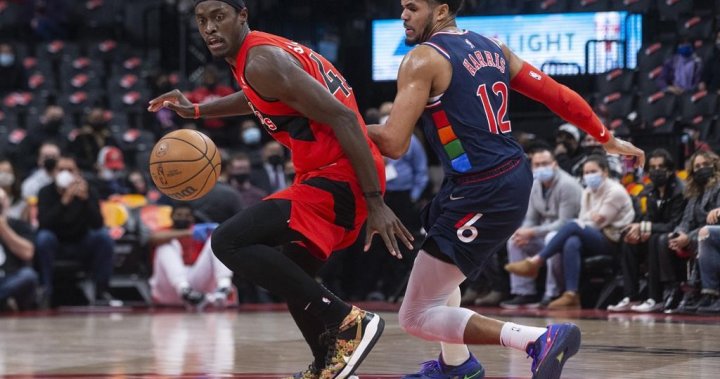 TORONTO – Before the undermanned Toronto Raptors took the floor against Philadelphia on Tuesday, coach Nick Nurse sat down with Chris Boucher.

Nurse talked to Boucher about “giving away a couple of pounds” to Sixers big man Joel Embiid. (At 200 pounds, Boucher is almost 80 pounds lighter than Embiid).

Nurse told him “just do your best.”

The undermanned Raptors dropped a 114-109 decision to the 76ers on Tuesday, and the loss spoiled an excellent showing for Boucher, who had a season-high 28 points, including five three-pointers, and tied his career high with 19 rebounds.

“Biggest thing was he was ready to take the challenge,” Nurse said of the Montreal native. “He was ready to fight them and I thought he hurt them.”

Joel Embiid had 36 points and 11 rebounds while Tobias Harris had his first career triple-double — 19 points, 12 rebounds and 10 assists – for Philadelphia (18-16).

“Aw man, that’s a big guy, I won’t lie,” Boucher said on defending Embiid. “But I think he made me a lot better today.”

Pascal Siakam had 28 points in his first game in two weeks, while Gary Trent Jr., finished with 19 points and Yuta Watanabe added 10 for Toronto (14-17).

The Raptors played with a patchwork lineup that included four hardship signees. One of them was D.J. Wilson, who only cleared COVID-19 protocols in time to join the team at halftime.

Toronto trailed for most of the night but never by double digits until the fourth quarter. Down 85-81 to start the fourth, the Raptors’ shooting went cold — they missed seven of their first nine shots — and Georges Niang’s three-pointer capped a 10-2 run that had the Sixers up by 11.

The Raptors rallied, and Boucher’s three-pointer pulled Toronto back to within three points with 3:42 to play.

Trent followed up a short jumper with a three-pointer to put Toronto up 107-106 with 1:41 left to the delight of the 6,960 fans at Scotiabank Arena.

Embiid’s basket put the Sixers up by one with 51 seconds left, and Harris hit four free throws down the stretch to seal the victory for Philadelphia.

COVID-19 has pummelled the NBA in the past couple of weeks as cases climb amid the new Omicron variant, and the Raptors have been among the hardest hit.

“It’s been tough,” said Siakam, on his second bout of COVID-19. “But this time around it was a little lighter. That first time (last spring) was just a lot and just feeling really sick and my body losing a lot of weight, and just uncomfortable. This time around it felt like a cold, to be honest.”

Precious Achiuwa and Khem Birch also cleared protocol but were held out for return to competition conditioning, while Dalano Banton was sidelined with a knee bruise.

Nurse had said pre-game he planned on monitoring the minutes of his three returnees, saying the players in isolation hadn’t been able to do much more than Zoom workouts.

But both Siakam and Trent played nearly 42 minutes apiece.

“I feel like I was tired the whole time,” Siakam said.

Nurse said the Raptors, who’ve seen three games postponed due to COVID-19, would finally be able to practise on Wednesday for the first time in more than a week.

“I imagine we’re not going to get much out of those two guys in practice but it will be nice to welcome probably some other guys back as well,” he said.

VanVleet is expected to be one of the players out of protocol on Wednesday.

The season-low crowd came after the Ontario government’s recent decision to cut the allowable capacity to 50 per cent for large events. Concessions were closed and fans could be ejected for not wearing their masks.

Siakam led the way with 14 points in a first quarter that saw the Raptors lead for much of the first five minutes before trailing 27-24 to end the frame.

A long jumper by Seth Curry had the Sixers up by eight points late in the second quarter. He hit a three with 3.2 seconds left to send the 76ers into the halftime break with a 55-48 lead.

Svi Mykhailiuk’s three-pointer with 1:39 left in the third quarter capped a 13-2 Raptors run that put them up by two.

The game kicked off a four-game homestand. The Raptors will host the Los Angeles Clippers on Friday.

This report by The Canadian Press was first published Dec. 28, 2021.