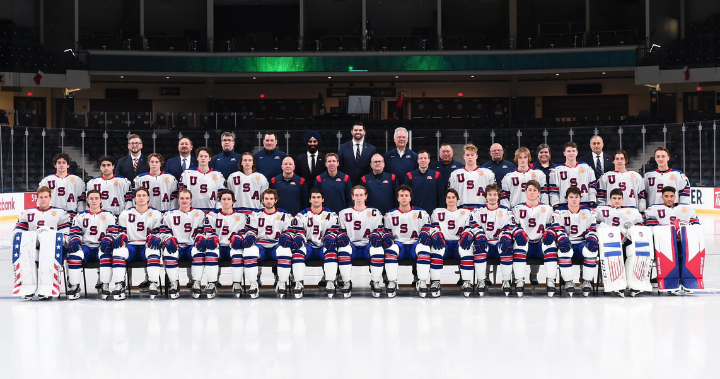 The American team was placed in a mandated quarantine. The game was scheduled to be played Tuesday afternoon in Red Deer, which is co-hosting the 2022 men’s under-20 tournament with Edmonton.

The game will be recorded as a 1-0 win for Switzerland by forfeit in accordance with the rules, International Ice Hockey Federation said in a statement.

“We’re operating in an ever-changing landscape and that’s very challenging.

“We’ve followed the tournament protocol from the outset and will continue to do everything we can to ensure our players have the opportunity to compete at the world junior championship.”

The U.S. team’s quarantine status will be evaluated later to determine whether it can compete in its next preliminary round game against Sweden on Wednesday, the IIHF said.

The Americans opened Pool B in Red Deer with a 3-2 win over Slovakia while the Swiss opened with a 4-2 loss to Russia. The top four teams in each pool advance to Sunday’s quarterfinal round followed by semifinals Jan. 4 and medal games Jan. 5.

Canada versus Austria in Pool A in Edmonton was the only other game on Tuesday’s schedule.

The U.S. defeated Canada 2-0 in the final of the 2021 junior tournament in Edmonton and the 2022 roster features six returning players from that team.

Teams that travelled to Canada quarantined for two days after their Dec. 15 arrival with just over 5,800 tests conducted on 462 players, staff, and game officials before the tournament opened Sunday, according to the IIHF.

Canmore-based artist to be featured at World Juniors

One Finnish player tested positive and was placed into isolation with no others on the team impacted. Two game officials were isolated after testing positive during quarantine.

The IIHF cancelled six men’s and women’s tournaments in January, including the women’s under-18 world championship a second straight year, because of concerns over COVID-19.