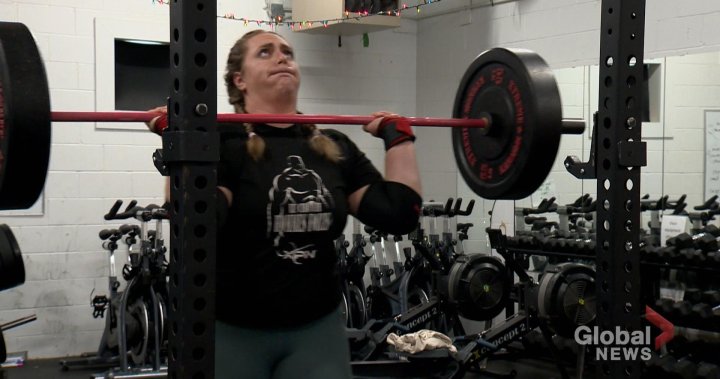 Growing up with older brothers, Jackie Osczevski’s household was a competitive one as a youth, and the competition always revolved around sports.

“My dad is a Phys. Ed. teacher, so naturally I did all of the sports at home,” she said.

From badminton to volleyball she’s always played something, but as a teen she was introduced to the gym, as she felt the pressures that many teens go through.

Community a strength for Saskatoon strongman

“I wanted to get fit because I had a prom dress that I wanted to fit into and societal pressures of all that associated with it,” she explained.

Her experiences at the gym brought out a new found confidence in a young Osczevski, something that she hasn’t lost since.

“I remember being that awkward, lanky, five-foot-10-inch, 17-year-old girl who was 170 pounds at her graduation and no one else was that size,” she said.

“I remember what that’s like and I know what it’s like to not be comfortable in your own skin, so if there’s a teenage girl out there who sees this reach out to someone who can help you.

“I know what it’s like to feel defeated, but this has given me so much confidence and helped me to become the best version of me that I can. Some people peak in high school, some people peak later on in life and those are the people you want to surround yourself with.”

As her love of the gym grew, she expanded her horizon, looking for the next great challenge in her life. What she found were strongwoman competitions.

“The odd woman here or there would post a stone life (on social media) and I was like, who are you and what do you do?” she explained.

From her first competition in 2016 she was hooked, eventually qualifying for nationals in her first year competing, as for the event that did it for her.

“When I pulled a truck for the very first time, I did it and I was exhausted, but I was competitive with the girls who had been training for a long time.”

“I just remember laying on the ground, being breathless going, ‘Let’s do that again,’” she chuckled.

Those accomplishments pushed Osczevski to turn pro in 2017. During the four years since she has continued to grow, most recently finishing second in Canada’s Strongest Woman competition, while placing 12th at the World’s event in Florida.

But her internal drive and determination won’t let her be satisfied with anything that she’s achieved in previous competitions.

“Well, it means I didn’t place first (in Canada), or in the top 10 (in World’s),” she laughed. “But, I’m still growing and I still want more from myself, so I feel like I haven’t actually reached the summit yet and I feel like there’s still more growth to happen.”

Competing on an international level has truly opened her eyes to the size and popularity of the sport that she has come to love, something that she never expected to see.

“I didn’t realize the grand scope that this sport actually has until I travelled to compete and saw that there are strongwomen just like me out there around the world and that Canada is really just a small pond,” she explained.

“I realized that I’m a small fish in a big ocean. In Canada it’s a small pond and I’m a big fish, but at that level, in the ocean, there are sharks and whales and I’m just a little perch, so that’s inspired me to pushing and to keep getting stronger.”

Even as the big fish in the local pond Osczevski has spent countless hours giving back to the local community as a coach and instructor.

“I don’t know if the magic would be there if it was someone else (coaching me),” strongwoman Domini Wilkinson said. “She doesn’t give up on you, she’s in your corner the whole time.

“It’s just so exciting to see them reach limits they never thought they could and (help them realize) that they’re stronger than they thought they were.”