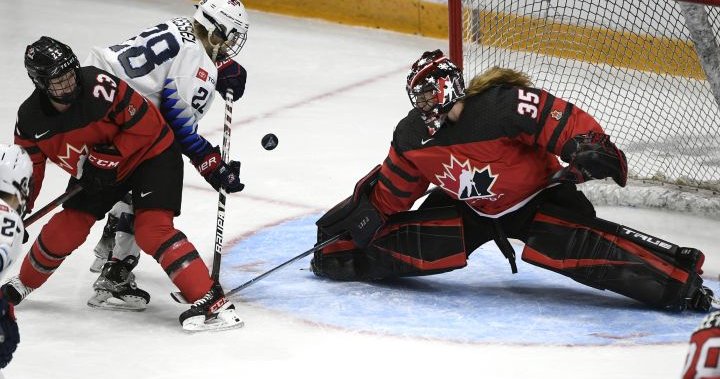 Two hockey games between the Canadian and U.S. women’s hockey teams in Alberta have been cancelled.

Canada and the U.S. were scheduled to conclude their Rivalry Series on Jan. 3 in Edmonton during the world junior men’s hockey championship and Jan. 6 in Red Deer.

Both games were called off because several Canadian players and staff were in COVID-19 protocol, Hockey Canada said Tuesday in a statement.

“The risk associated with playing the final two Rivalry Series games with less than one month before our teams are set to compete in the 2022 Olympics is too high to finish our series with the United States,” said Gina Kingsbury, director of hockey operations with Hockey Canada.

“Changing our schedule and not being able to play the United States is always difficult, as our players and staff want to play against international competition and put on a great show for hockey fans.

“Unfortunately, we need to do what is right for our athletes from a health perspective and for our team preparation in order to ensure everyone remains healthy and eligible for Beijing.”

The announcement came the same day the U.S. junior men’s team forfeited a preliminary-round game at the under-20 championship to Switzerland because two American players tested positive for the COVID-19 virus.

What was a nine-game series between the Canadian and American women to help both prepare for February’s Winter Olympics in Beijing and choose a roster for it was limited to six games.

Canada won four of the six games played against the U.S., including two in overtime.

A game scheduled for Dec. 20 in Saint Paul, Minn., was also cancelled due to coronavirus concerns.

Hockey Canada was expected to name its 23-player Olympic roster that same week, but has delayed that announcement.