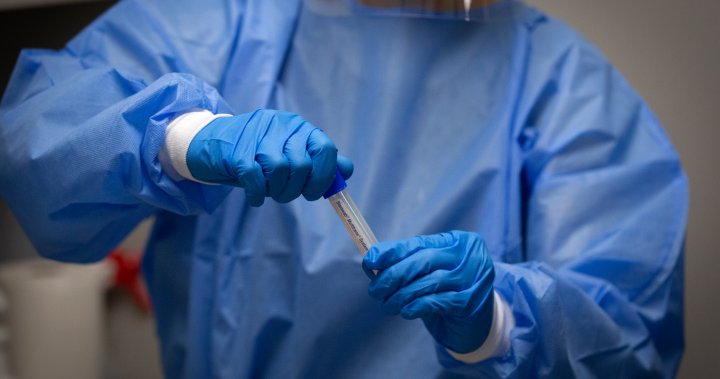 Alberta Premier Jason Kenney said the province’s positivity rate for COVID-19 has gone up by 450 per cent compared to the four per cent average Albertans have been seeing for much of December.

​The comment made at Tuesday’s provincial update was approximate as the usual in-depth data is expected to be released Wednesday.

The detailed daily breakdown of case numbers will resume on Jan. 4 and every weekday thereafter.

“I can share with you the approximate number of cases confirmed over the last 24 hours, which is about 1,400 identified from around 6,500 tests. That puts our positivity rate at approximately 22 per cent province-wide. I know it’s much higher in Calgary, and that is 100 per cent higher than just a week ago.”

​The premier went on to say the preliminary data illustrates just “how quickly” the Omicron variant of COVID-19 is spreading.

He added that even though this isn’t news Albertans had hoped for going into the New Year, the province is “in a better position today than we were at the start of any previous wave” of COVID-19.

Kenney attributes this to nearly 90 per cent of Albertans aged 12 or older having received at least one vaccine dose, while 85 per cent have received a second dose, and those getting their booster vaccine continues to “grow by the hour” in the province.

“As of Dec. 26, at least 20 per cent of Albertans who have received their second doses had also received a third dose.”

Chief medical officer of health Dr. Deena Hinshaw was also present at Tuesday’s news conference. She reiterated the data presented was only approximate and that the Alberta Health surveillance team would be verifying exact numbers.

“That process will be completed before the update is posted tomorrow, so the numbers may change slightly,” Hinshaw said.

“I also want to emphasize that every province in Canada has adjusted reporting over the holidays since our teams have been working for almost two years straight, and their ability to take a few days off is a critical way to express our appreciation for their hard work.”

Alberta’s top doctor said there was some confusion around those who have symptoms of COVID-19 such as: a cough, runny nose, sore throat or fever.

Not everyone who gets a positive result from a rapid test should go for a lab PCR test. Hinshaw said the only people who should book a PCR test to confirm the result are individuals who live or work in high-risk settings like continuing care, correctional facilities, acute care or shelters, or if they have risk factors that make them eligible for antibody treatment. Those risk factors can be found by clicking here.

If you don’t fall into any of those categories — but still test positive — Hinshaw said you do not need to get a PCR test, even if it’s a child with no medical risk factors.

Previously, the government website stated that schools were a high-risk setting and that teachers and students should get a PCR test should they test positive from a rapid test. However, Hinshaw noted they’re working to update the website as “this is how fast things are changing” with the Omicron variant spreading at the rate it is.

The change came just last week as she said at the time they were following protocols for when it came to a certain number of new cases per day and to follow up with school-aged kids along with those in daycares.

However, due to the surge in numbers Alberta is currently dealing with, Hinshaw said it’s not possible to maintain those individual follow-up notifications.

“We expect numbers to rise much more within the next several weeks, so that protocol has been altered because we do need to focus our capacity on those again, where there’s the highest risk of severe outcomes,” Hinshaw said.

According to Hinshaw, regardless of the results, anyone with any symptoms should isolate.

She said even people with symptoms may test negative on a rapid test — or even multiple tests.

“Rapid tests are not as sensitive as PCR tests, which means that if you have symptoms, you should stay home and away from others until you feel better.”

“Even if you have multiple negative rapid tests, please do not spend time with others if you’re feeling sick, no matter what a rapid test result shows.”

“Yesterday, as you heard, we had approximately 1,400 new cases identified out of 6,500 tests. Our positivity rate over the past five days has ranged from around 17 per cent to 22 per cent,” Hinshaw said Tuesday.

“We have never before had a higher positivity rate than just over 13 per cent in any of our previous waves. This is one more data point that reinforces that Omicron is different from anything we have ever faced.”

​Hinshaw said in Calgary and Edmonton, about one in every three people going for tests are testing positive for the disease. In total, she estimates there are roughly 15,000 known active cases in the province.

“This does not take into account those who have not been tested or those who may have tested positive on a rapid antigen test and are following our guidance to free up PCR capacity for others by not going for confirmation,” Hinshaw said.

Despite the spike in new cases, hospitalizations remain relatively stable at this time, according to Hinshaw. She was quick to add they also know from previous waves that hospitalizations are a lagging indicator and that Tuesday’s case numbers will take time to reflect in any acute care numbers.

Hinshaw pointed to the fourth wave of the Delta variant, during which Alberta didn’t see an increase in ICU admission until about a month after cases began to climb. With that in mind, she said Albertans won’t know the full effect of the Omicron variant until later in January.

“The trajectory is being set right now,” Hinshaw stated.

“We will likely see hospitalizations rise in the coming weeks due to the exponential growth of the Omicron variant in our province.

“Well, it seems from other countries that have had more time Omicron that there is a reduction in severity. The degree to which this happens is not yet clear.”

The top doctor said even if the latest variant causes a lower risk of serious illness for someone, there could still be a significant impact on Alberta’s hospital system due to the substantial rise in cases.

“The problem is we simply don’t know and our opportunity to slow case growth is right now.”