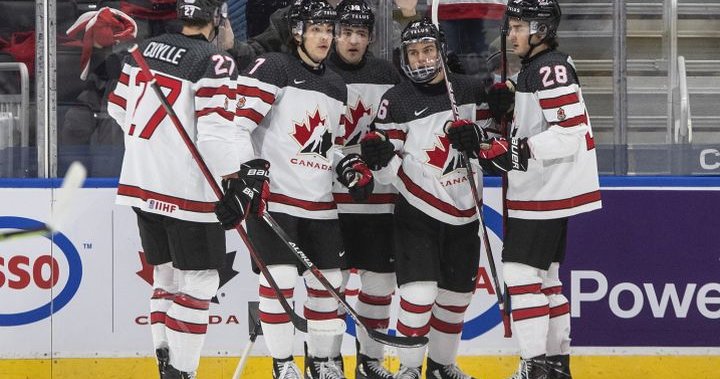 The 16-year-old from North Vancouver, B.C., propelled Canada to an 11-2 win over Austria with his quadruple.

Mason McTavish scored twice and had an assist and Cole Perfetti had a goal and two assists for the host country (2-0). Kent Johnson, Lukas Cormier, Logan Stankoven and Mavrik Bourque also scored for the Canadians.

Eliot Desnoyers and Will Cuylle each assisted on three Bedard goals. Brett Brochu stopped 20 of 22 shots for the win in his first start of the tournament.

Bedard was the seventh 16-year-old named to the national men’s junior team in its 45-year history, joining players such as Wayne Gretzky and Sidney Crosby.

No other 16-year-old produced four goals in a game, however. Gretzky scored a hat trick in 1977 against Czechoslovakia.

“It’s definitely cool hearing your name and one of, if not the greatest to ever play,” Bedard said. “It’s one game and I don’t think I’ll be getting 2,800 points in the NHL. It’s cool though to hear my name with his.

“It’s good, but we’ve got a long way to go in this tournament.”

Canada plays its second Pool A game in as many days Wednesday against Germany and concludes the preliminary round on New Year’s Eve against the Finns.

That’s if the men’s under-20 tournament isn’t further derailed by the COVID-19 virus. The Canada-Austria matchup was the only game played Tuesday.

Two American players testing positive had the U.S. forfeiting a Pool B game to Switzerland with the entire team in mandatory quarantine.

The Swiss were awarded a 1-0 win under International Ice Hockey Federation rules. The IIHF has yet to determine if the U.S. can play Wednesday’s Pool B game against Sweden in Red Deer.

The quarterfinals are Sunday followed by the Jan. 4 semifinals and Jan. 5 medal games in Edmonton.

“All the work that’s done to get in here and pull this tournament off under these trying conditions, you don’t want to see any team forfeit a game the way the U.S. (did), so hopefully just a one-off for them and the tournament continues,” Canadian head coach Dave Cameron said.

“I think our team’s been really diligent. We’re in a tight bubble. You keep your fingers crossed and keep preaching the diligency part of it.”

Alberta’s COVID-19 restrictions limits spectators in Edmonton and Red Deer to 50 per cent capacity. Rogers Place was far from its half-capacity of 9,320 on Tuesday with attendance of 3,862.

Players moving out and into the lineup had Canada shuffling lines Tuesday, with Bedard shifted onto a line with Cuylle and Desnoyers.

Canadian forward Justin Sourdif served a one-game suspension for an illegal check to the head in Sunday’s tournament-opening 6-3 win over Czechia.

Stankoven of the Kamloops Blazers and Soo Greyhounds defenceman Ryan O’Rourke drew in to play their first games of the tournament.

Bedard’s fourth goal was a tip-in at 2:34 of the third period. The Canadians scored six unanswered goals before Austria responded late in the second period.

Bedard scored back-to-back goals in a 71-second span late in the first to spot his team a 5-0 lead.

0:25
Connor Bedard happy to fill any role with Team Canada at world juniors

The Regina Pats forward then collected the puck off an offensive-zone draw and whipped a wrist shot over Sommer at 6:13 of the second period to complete his hat trick.

He got a second swing at a pinballing puck for a power-play goal and finished a give-and-go with Cuylle off the rush in the first period.

A Brochu gaffe led to Austria’s first goal with 31 seconds remaining in the second period when the Canadian goaltender lost a foot race with Vinzenz Rohrer.

The Ottawa 67 had time to whip the puck cross-ice to Necesany, who had half an open net as a target.

Austria earned promotion to the 2021 top-tier world junior men’s championship by winning the 2020 Division 1 tournament. For a second straight year, and because of COVID cancellations of lower-tiered tournaments, no team will be relegated from this tournament.

“Canada is not the easiest team to play against,” Rohrer said. “When we talk with the coaches in the locker-room, we just say we want to focus on our games and not how the relegation is and what team it is.

“We had really good parts of our game where we can really take something from that. The second period we went 1-1.”