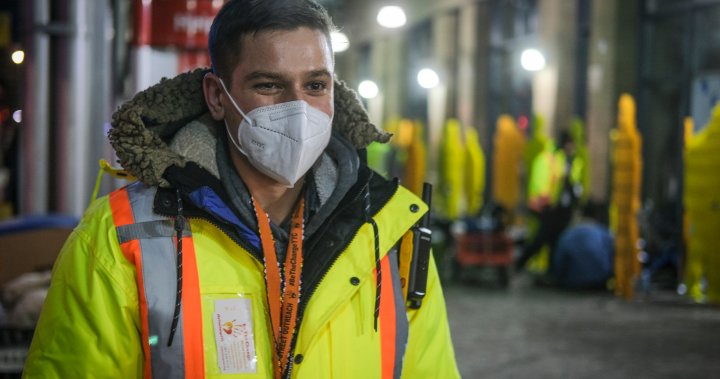 This winter, a Calgary advocate is sharing his story in hopes of bringing awareness to the city’s homeless population.

“I experienced homelessness,” 31-year-old Chaz Smith said. “I lived in emergency shelter, I slept rough on the streets.”

In 2005, at 15 years old, Smith said he found himself living on Calgary’s streets after being apprehended from his parents due to a tumultuous home life.

“I had a lot of mental health concerns,” he said. “I suffered from a lot of panic attacks, anxiety, depression and so that kind of snowballed.

“When I was 16 I remember many times… envisioning grabbing some rocks in my pocket, going up into the towers and smashing a window and jumping.”

Smith said when he couldn’t stay in a shelter he would often walk around the city all night, too afraid to go to sleep in the freezing cold.

“I remember I would stay in heated parkades and the police would come and they would kick us out because people would call,” he said.

Smith said he started using substances such as cannabis and eventually got into harder drugs like MDMA.

“When my depression and anxiety really started to amplify and take over I didn’t care about myself anymore.

“I didn’t love myself. I actually remember hating myself.”

After three years of experiencing homelessness, Smith said he reached a turning point and after several days of using substances, decided to reach out to his youth worker.

“She took me to Tim Hortons to get something to eat and she looked at me in the eyes and I saw this glow in her eyes and she said, ’Chaz, I wish I could make you stop doing what you’re doing.’”

Smith said he left that day feeling confused and touched that someone actually cared about him.

“I thought, ‘Maybe life is worth living, maybe there is potential here, maybe she sees something that I don’t see,’” he said.

“Being given my own place, they paid my first month’s rent and my damage deposit,” Smith explained. “I was able to go back to school and I got my first year carpentry at SAIT.

“There was times I couldn’t pay my rent and they gave me a buffer for a few months and that set me up for success.”

Smith said in 2010 he began working in the homeless sector with the Calgary Homeless Foundation and five years later started his own street outreach program called Be The Change YYC.

“In 2015, I went out with some sandwiches and some juice boxes, collected some friends and that is how Be The Change YYC started.

“I saw many people walking the streets and sleeping rough outside that really needed those equitable services of people bringing them food and water and clothing.

“(I wanted) to create those relationships to bring them back in to the community.”

Be The Change YYC now has an army of volunteers who walk Calgary’s streets handing out donations and connecting people with resources.

“There are success stories,” said Jacelynn Plemel, a team lead with Be the Change YYC and a social worker. “If I didn’t believe people have the capacity to change and to make a better life for themselves I definitely wouldn’t not have gotten into social work.

“People say that they want to help and they want to do things, but they don’t want to be the ones to do it,” Plemel said. “Even though Chaz is several years my junior, I look up to him because he’s got such a passion and heart.”

Smith most recently had been advocating for funding for warming shelters to help Calgary’s vulnerable population.

“I think we need to offer dignified approaches,” he said. “What would you want if you were experiencing homelessness?”

Smith hopes that by sharing his experience Calgarians will challenge their own beliefs surrounding homelessness.

“When people see a person experiencing homelessness today, I want them to try and see me,” he said.

“We can’t give up on these individuals because every life is worth something.”