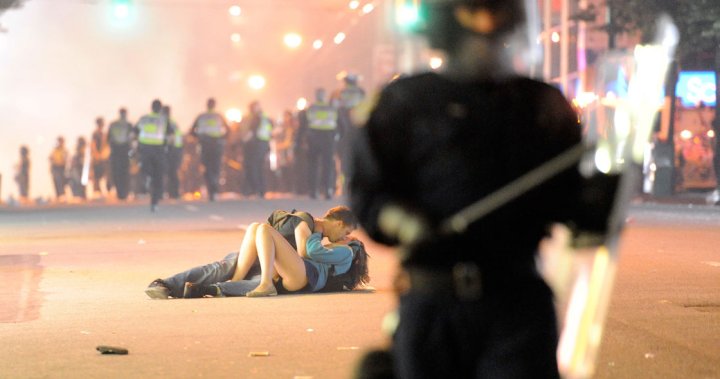 As the pandemic drags on, and as parts of B.C. were hit with heat waves, wildfires, floods, and storms, sometimes it may have seemed as if there was only bad news to report.

But amidst loss and destruction, British Columbians pulled together to save animals, raise money for charities, and save those in need.

Here’s a look at some of the good news stories from 2021.

B.C. boy with autism who only eats brand of discontinued waffles gets home recipe

In March, Nature’s Path, a Richmond-based organic food producer, came to the aid of a desperate mother who was looking for their specific brand of waffles, which were the only thing her special-needs son would eat.

Nine-year-old Jerico Roman has autism along with extreme oral aversion and complex eating challenges, and will eat virtually nothing but this particular type of maple cinnamon waffle.

His mother, Jenna, told Global News the growing boy usually puts down two boxes of the waffles a day.

But panic had set in when she learned the product had been discontinued.

Nature’s Path was able to adapt the waffle recipe — which is usually made in massive batches — for home use and delivered it and all the necessary ingredients to the family.

1:05
Bystanders save man who slipped into Lynn Canyon water

Bystanders save man who slipped into Lynn Canyon water – Mar 26, 2021

Also in March, an officer candidate with the Canadian Forces was hailed as a hero for saving the life of a man who had fallen into Lynn Canyon in North Vancouver.

Craig Vollweiter was enjoying a day off in the popular park when he was approached by a young girl in distress.

Vollweiter said he followed the girl down to the boardwalk at the riverside, where he found other people calling for help and a woman holding her husband who was face down in the water.

The man had suffered a medical incident, slipped, hit his head and fallen.

Vollweiter and the man’s wife were able to perform CPR until firefighters arrived.

In June, a B.C. woman set out to look for a group of Good Samaritans who came to her aid after a stranger took her wallet.

Courtenay Cullen said she was not only grateful for their help, she wanted others to know how the kindness of strangers can make all the difference.

Cullen said she was on Commercial Drive in Vancouver when she donated money to a busker playing the flute. Soon after, a man slipped his hand into her purse, grabbed her wallet and took off. She dropped her bags and chased after him.

“Other people started to chase him for me,” she said. “It was amazing. People on bikes, people on foot. A man came out of his house to help. I’ve never seen anything like it.”

The crowd caught up to the man, who surrendered the wallet. Then, they let him go.

1:48
The story behind the Vancouver riot kissing couple photo

The story behind the Vancouver riot kissing couple photo – Jun 20, 2011

10 years later: The Vancouver riot kissing couple is still together

In June, we learned that the couple in one of the most popular photos of the 2011 Vancouver Stanley Cup riots was still together.

Vancouver photographer Richard Lam shot thousands of photos of people rioting on the streets after the Vancouver Canucks lost to the Boston Bruins in Game 7.

But one photograph stood out.

Known as the Vancouver riot kissing couple, the image captured a man kissing a woman they lay on the street with police in riot gear around them.

The couple, Australian Scott Jones and Canadian Alex Thomas, is still together, raising a family together in Perth.

Dog spotted in crate strapped to back of RV in B.C. heat wave seized by SPCA

In July, a dog that had been spotted in a crate strapped to the back of an RV amid blistering temperatures was seized by the BC SPCA.

The German shepherd was spotted June 28 in a crate on the back of the RV driving on Highway 1 near Abbotsford.

The SPCA said police were able to trace the dog’s owner and get a warrant to seize the animal.

The canine was seized and eventually put up for adoption.

Another dog made headlines in July when he helped save the life of a colt living on a farm in Tappen.

“At 1:50 in the morning, all of the sudden this little girl [Toffee] shoved her nose so hard and made such a big woof, just like she meant business, so I jumped out of bed and she looked at me and she just took off down the stairway and out into the yard,” said proud owner Marie Hurley.

The South African Boerboel led Hurley outside to their fire pit, where she saw the emergency.

“I saw the mare had had her foal and it was making this horrible, horrible noise — it was a snoring noise … It was just horrible, so I’m running and I can see that the amniotic sac has not broken. So this poor little thing was in a bag and you could see the sack sucking into the nostrils and he was smothering to death,” said Hurley.

“So I go running as fast as I can, ripping the sac off his face and clearing out his nostrils, and I would’ve never woken up if it wasn’t for Toffee.”

3:10
B.C. couple takes a leap of faith with Jamaican patty business during COVID-19

In October, a B.C. couple shared their story of how they started a whole new business during COVID.

Casey Simpson and Nicholas Simon were both doing well in their respective fields until the pandemic caused a major shift in their livelihood.

They decided to start a making, selling and delivering Jamaican patties, and The Real Patty Co took off.

Zen is the first accredited facility dog from the Pacific Assistance Dog Society to work internally in a B.C. police department, providing physical, social and emotional support to its sworn members and civilian staff.

He was bred for the society and raised and trained to be an assistance dog for someone with a physical disability.

He underwent advanced training at the organization’s Burnaby campus before landing in a police building that houses the department’s high-stress investigative units.

When the U.S.-Canada border reopened to non-essential travel in November, many Canadians were excited to head south to shop or get gas.

But the requirement of a negative PCR test to return, no matter how long the trip, was a deterrent for many.

That changed in mid-November, however, when the federal government dropped the requirement for Canadians returning from the U.S. for any trip less than 72 hours.

2:03
This Is BC: Floods remind British Columbians there are helpers and heroes who live here

This Is BC: Floods remind British Columbians there are helpers and heroes who live here – Nov 18, 2021

Three atmospheric rivers that hit the province in November decimated parts of the Fraser Valley and the southern Interior.

As residents had to leave their homes and livelihoods, British Columbia got a reminder of how people can still come together in times of need.

Volunteers used their own boats to rescue trapped people and animals, and to ferry goods between communities using roads that were now rivers.

Others spent long hours setting up cots, blankets and food at emergency shelters.

December started off with a reminder British Columbians are generous with their money as well.

The CKNW Kids’ Fund raised $1,512,767 in donations from generous listeners during its annual pledge day radiothon.

The fund, which used to be the CKNW Orphan’s Fund until it rebranded in 2018, was founded in 1944, with the initial aim of raising funds to buy gifts for the Loyal Protestant Home, an orphanage in New Westminster.