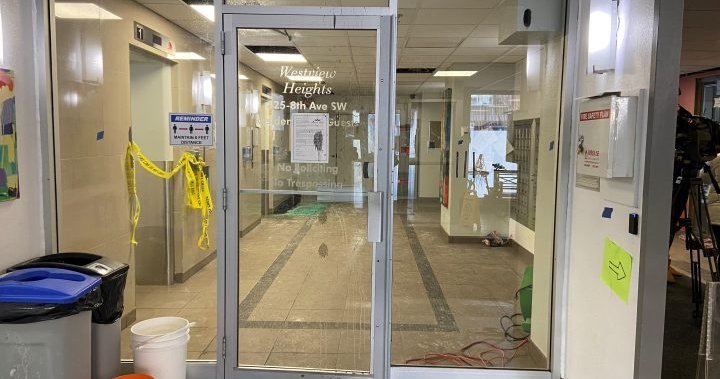 Hundreds of people have been forced to leave their homes in a downtown Calgary apartment building because of several burst pipes.

The trouble started last Wednesday at Westview Heights in the 800 block of Eighth Avenue S.W. when a burst pipe led to flooding in the 297-unit building. Tenants say they lost their heat, water and electricity.

Some chose to stay in nearby hotel rooms provided by property management.

“I am staying at the hotel with everybody else because this is not livable.”

The leasing manager said heat and electricity were back by Friday but then another pipe burst on Boxing Day. That flooding resulting in icy stairwells and no elevators.

Ward 7 City Councillor Terry Wong has been speaking with residents and the property manager.

“They have been working diligently since Wednesday. They’re getting contractors to repair the elevators and to take care of the heating systems and water. It’s not a good situation,” Wong said.

The leasing manager said they managed to get everyone out safely despite the icy conditions in the building on Sunday.

“We had security guards on every level as well as well as our crews and we walked everybody down to keep them safe and we put people up in the hotels,” said Don Habib, Mayflower Ventures’ leasing manager.

Wong said city inspectors will be on site to ensure the building is safe for residents to return.

According to Habib, tenants will be out of their homes for the next two days.