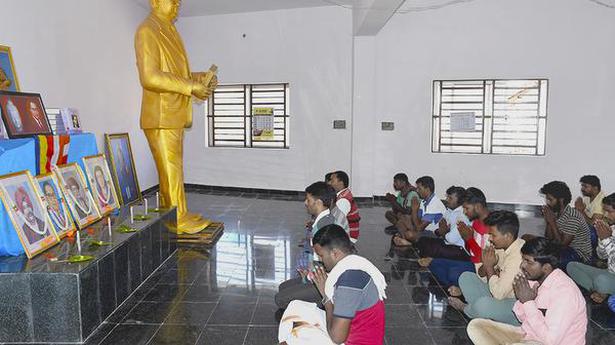 Many Dalit families, who converted to Buddhism in recent years, are opposed to the Karnataka Protection of Right to Freedom of Religion Bill, 2021, terming it the State Government’s “latest tool targeting Scheduled Castes.” The Bill, passed by the Legislative Assembly, is yet to be tabled before the Legislative Council.

In recent years, many families in Hassan district have converted to Buddhism. Swamy Nittur, among the first to get converted in Nittur in Hassan taluk in 2014, told The Hindu that conversions took place as Dalits were fed up with caste-based atrocities.

“Earlier, we were not allowed to enter temples. During the annual Doddamma festival, Dalit boys were made to take part in the procession as Devara Makkalu (children of god), covering their bodies with neem leaves. All such practices stopped once we converted to Buddhism,” he said.

They said that conversion brought changes in the lives of Dalit families. “Religious conversion and the teachings of B.R. Ambedkar influenced our thoughts and acts,” said Thotesh Nittur. These families in the village celebrate Buddha Poornima, Ambedkar Jayanti, and hold prayer meetings regularly at the Buddha Vihara.

Instead of this Bill, the families said, the State Government should take measures to stop atrocities against Dalits.

“Let them slap cases against those who commit atrocities against Dalits under the Goonda Act,” said Mr. Swamy Nittur.

Sathish, Hassan district president of the Republican Party of India, who also converted to Buddhism, said, “By making use of this law, the government may harass priests, pastors, and Dalits. We are planning protests against this.”

A meeting was held in Hassan on Sunday to plan protests in the coming days.

Karnataka Dalit Sangharsha Samiti (Ambedkar Vada) president Mavalli Shankar said the proposed law was part of BJP’s strategy to “divert people’s attention” from other burning issues. “There was no need for the law when the Constitution itself has spoken about forced religious conversion. Moreover, the Constitution has given liberty to every individual to choose the religion of his or her choice,” he said.