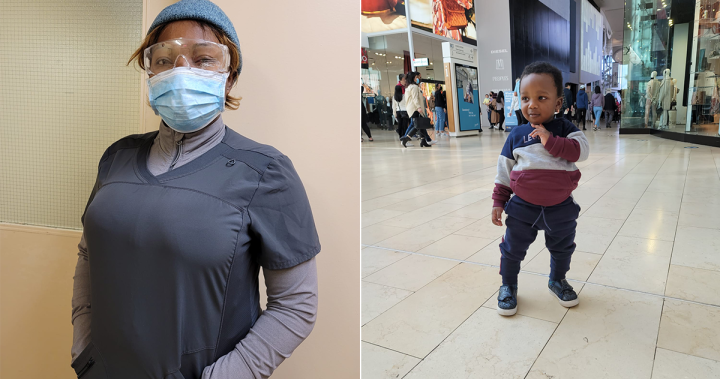 Idayat Saka did exactly what her doctor told her to do to protect herself and her baby.

The 33-year-old mother of four who lives in Toronto stopped working at the beginning of her third trimester of pregnancy due to “high-risk” complications from prior cesarean births.

What Saka couldn’t have known at the time was that her decision to stop working when she did – on March 18, 2020 – would later be used by an immigration officer to deny her permanent residency in Canada.

This rejection means Saka, her husband and two of their children could soon be deported to Nigeria. Her youngest sons, ages three and one, can’t be deported because they’re Canadian.

“I was crying. I was done,” Saka said, explaining the heartbreak she felt when her application to remain in Canada was rejected.

Saka and her husband are failed asylum seekers. They came to Canada in October 2017 after they say their lives were threatened by gunmen in Nigeria. These claims were later dismissed.

After they arrived in Canada, Saka went back to school to become a personal support worker and has spent more than 2,000 hours caring for sick and elderly patients in Ontario since the start of the COVID-19 pandemic. Most of this work occurred during the deadly third and fourth waves of the virus.

She applied for permanent residency in Canada through a special program set up by former Liberal immigration minister Marco Mendicino. The program recognizes the “exceptional service” of failed and pending asylum seekers who’ve worked on the front lines of the pandemic by offering them an alternative pathway to residency.

2:25
Toronto senior being deported after more than 20 years in Canada

Toronto senior being deported after more than 20 years in Canada

When the program was announced, Mendocino said these workers were heroes who displayed the uniquely Canadian quality of looking out for people in need. He also said they put themselves at risk to take care of their communities.

But Saka’s application was rejected by an officer at Immigration, Refugees and Citizenship Canada because she didn’t meet one of the program’s basic requirements: having worked at least 120 hours between March 13, 2020 (the day pandemic travel restrictions were first introduced in Canada) and Aug. 14, 2020 (the day Mendicino announced the program).

Because the program was announced months after Saka went on leave, there was no way for her to know this decision would later be used to deny her residency.

“Whenever I think about it I’m so depressed,” she said.

Saka is appealing the decision to the Federal Court.

Her lawyer, Kes Posgate, said the decision is unreasonable because it doesn’t recognize the unique circumstances she experienced while pregnant, nor does it recognize her contributions to the struggle against COVID-19.

Posgate also said the policy violates the Canadian Charter of Rights and Freedoms because it discriminates against pregnant people by not offering them an accommodation to the 120-hour work requirement.

“This speaks to the spirit of the policy,” Posgate said. “How do you technically account for who is and who isn’t a hero?”

One of the most basic principles of Canadian law is that administrative decisions, including those made by immigration officers, must be “justified, intelligible and transparent.” This was confirmed by the Supreme Court in a 2019 landmark decision.

Failing to adhere to this principle can, and often does, result in decisions being overturned by the courts.

In Saka’s case, the immigration officer was asked to consider both the “humanitarian and compassionate” circumstances that meant she didn’t meet the 120-hour work requirement, plus the “best interest” of her children.

Saka openly acknowledged that she didn’t work the number of hours needed during the specified time period, but said she would have if her doctor hadn’t told her to stop working due to her high-risk pregnancy.

She also said her work history, before and after she went on leave, shows she is committed to working full-time as a health-care professional in Ontario. This is further demonstrated by the fact that she went back to work less than three months after giving birth in June 2020 by cesarean section and has been working full-time ever since.

3:26
‘My daughter is gone’: Deadly consequences for Afghan refugees still waiting to be resettled in Canada

‘My daughter is gone’: Deadly consequences for Afghan refugees still waiting to be resettled in Canada – Dec 16, 2021

But the immigration officer who rejected her application didn’t mention any of these factors in their written decision.

The only explanation the officer provided for rejecting her case was that Saka didn’t meet the 120-hour work requirement and that they didn’t believe it wasn’t an oversight that an exemption for maternity leave wasn’t built into the policy.

Posgate said this decision is no good because immigration officers are required by law to assess humanitarian circumstances whenever a foreign national who lives in Canada requests an exemption from “any applicable criteria or obligation” of the country’s immigration act.

He said the decision also fails to meet minimum standards of transparency because it offers almost no insight into the immigration officer’s rationale for why a humanitarian exemption wasn’t granted.

“If this decision stood, I think it would be unjust,” Posgate said.

The program announced by Mendocino isn’t so stringent that no exemptions are offered.

Applicants must also show that they worked the equivalent of at least six months full-time as a health-care worker before Aug. 31, 2021 in order to qualify. But unlike the less onerous 120-hour requirement that must have been completed during the first five months of the pandemic, this requirement is eligible for exemptions due to maternity leave, disability or illness.

This means Saka – who worked 42.5 hours of the 120-hour requirement – is automatically rejected, even though she’s worked thousands of hours caring for people during the pandemic.

Meanwhile, a person who meets the 120-hour requirement, but who doesn’t meet the six-month requirement because they went on maternity leave, would still be eligible for the program even if they didn’t work a minute more than 120 hours.

Global News asked the office of Immigration Minister Sean Fraser if he believes the policy announced by Mendicino discriminates against pregnant persons and why there isn’t an exemption to the 120-hour work requirement for maternity leave. Fraser’s office did not answer these questions. Instead, he referred the request to department officials.

“This temporary public policy was put in place (with) specific criteria recognizing the service of those who were actively working in the health-care sector, where there was an urgent need for help, and putting their own lives at risk to care for others during this very challenging time,” said Immigration Canada spokesperson Sonia Lesage.

“While applicants cannot request an exemption from individual criteria in a public policy, requests to be granted permanent residence on humanitarian and compassionate grounds may be considered outside the context of the public policy.”

If Saka wins her case at he Federal Court, her application will be sent back to another immigration officer for reconsideration. Fraser could also intervene and allow her and her family to stay.

Whatever the outcome, Saka feels like she’s earned the right to remain in Canada.

“I’ve worked for it and I’m still working,” she said.