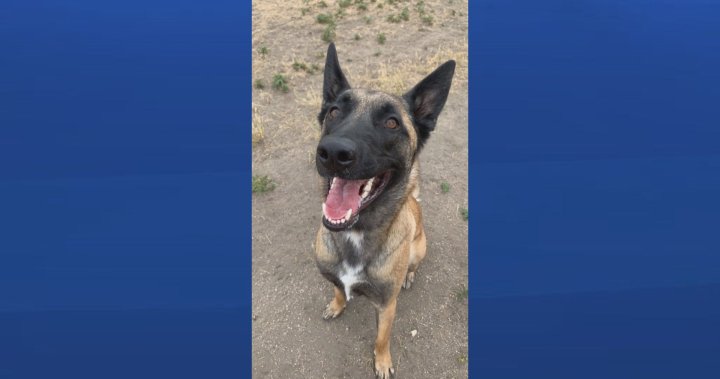 A family in Saskatoon is looking for their dog after he went missing from their home on Christmas Eve.

Rina Wozniak said her family left their home on 113th Street on Friday for a dinner. Around 7:30 p.m., Wozniak received a call that police had shown up to their home as the front door was open.

The family is still searching for Tito, who is a 2-year-old Belgian Malinois. They are worried for his safety and wellbeing as temperatures dipped below minus 30C this weekend.

Wozniak posted on social media on Friday to spread the word about Tito’s disappearance. The post has since garnered more than 800 shares and hundreds of comments from people who are keeping an eye out.

“Tito loves his home, he would never stray far away from his home,” Wozniak said.

The family had just recently adopted Jace. Wozniak said the front door was locked and thinks Jace managed to get his paws up and accidentally hit the handle, opening the door.

Wozniak estimates 30 to 40 people have shown up at her front door to help look for Tito.

“We haven’t stopped (searching) since the evening of the 24th, so we’re extremely exhausted. We just want our dog home. My kids miss our dog, our other dog misses the dog, we just want him home.”

Wozniak is asking residents in the area to check in their backyards and anywhere a dog may hide to keep warm, like under a deck.

Wozniak said Tito looks like a smaller German Shepherd with a dark face.

“He looks intimidating, but he’s not. He might be feral because he’s been gone for two days in the cold,” she said.

Wozniak said if anyone spots Tito they should call his name and come down to his eye level, gently. Wozniak added to call animal control or herself at 306-292-6572 if Tito is found.

2:06
N.B. family’s lost dog has been found but may never come home