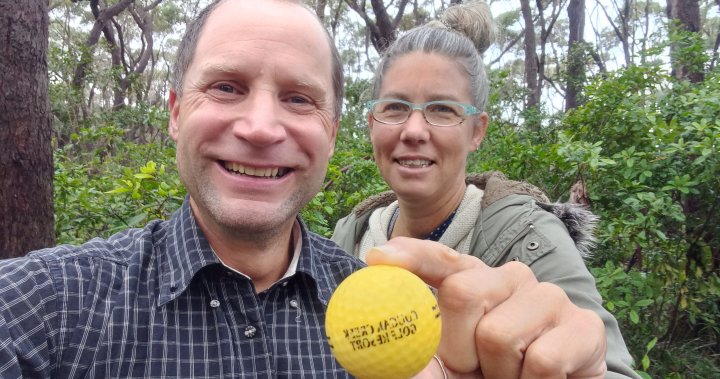 2021 was another stressful year for many people, but amidst chaos were uplifting moments and happy stories.

From an Edmonton community coming together to help a young basketball player shoot for the stars, to an Alberta Beach man building birdhouses for charity, and an Alberta golf ball that ended up on the other side of the world, Global News covered many positive tales over the past 12 months.

Here are some of those stories:

An Edmonton teenager, Anthony Muobike, 14, thought he was causing a disturbance when he would spend hours outside dribbling his basketball, but that was not the case all.

It actually ignited a community to come together to help him shoot for the stars.

This past summer, the teen spent nearly every spare minute on his north Edmonton driveway — sometimes upwards of four hours a day.

Little did he know that all of his dribbling caught the attention of one of his neighbours.

An Edmonton teenager thought he was causing a disturbance when he would spend hours outside dribbling his basketball, but that was not the case at all.

It actually ignited a community to come together to help him shoot for the stars.@SKomadinaGlobal has more. pic.twitter.com/3GxXhthdmi

Ian Ray, who has lived in the neighbourhood for about 13 years, said the young man’s basketball skills caught his eye. But he couldn’t help but notice the teen was missing a net.

So Ray took to Facebook, and offers came in from several community members who wanted to donate their used nets to Muobike.

But the post garnered so much attention the area Canadian Tire swooshed in and donated a brand-new net, along with a gift card.

The story even caught the attention of NBA star LeBron James.

The summer of 2021 was a deadly one on the water, with more than a dozen drownings across Alberta — but the heroic actions of an 11-year-old in Whitecourt prevented a young boy from becoming another victim.

Melanie Drake was at Rotary Park with her four kids, including her five-year-old, Bo. At one point, Bo wandered into the water and quickly started to struggle.

Alberta mom grateful after 11-year-old rescues her 5-year-old from pond: ‘He’s my angel’

Nearby, 11-year-old Austin Loiseau was floating in the water. When he saw what was happening, he jumped in to help Bo, carrying him to the shore.

Austin is on the autism spectrum, and according to his mom, when things get too busy and chaotic for him, he’ll try to find a more peaceful place — which is why he was floating on the pond instead of playing in the park.

It was a case of being in the right place at the right time.

Chubby Cree is a First Nations hand drum group in Edmonton that is gaining recognition for their passionate Indigenous music.

Singer Noah Green has a voice that’s larger than life and his music is steeped in traditional Cree culture.

Green and his grandmother, Carol Powder, have been performing together for years in front of thousands of people.

When hundreds of unmarked graves were found at residential school sites this past year, the young drummer responded by bringing healing through song.

Marie Whelan was a mentor and a leader in education for more than five decades, and at the age of 81 she was finally ready to retire.

After being an educator for 53 years, the cherished principal did not return to class at Monsignor Fee Otterson this September.

To honour her career, Carole Anne Devaney shared Whelan’s legacy with viewers back at the end of the school year, and recently touched base with Marie to see how she’s adjusting to retirement life.

Whelan said she’s enjoyed sleeping in, spending more time with her husband, kids and her grandchildren — especially around this festive time.

2:47
81-year-old Edmonton principal calls it a career after 53 years

When the COVID-19 pandemic shut down much of the world in spring of 2020, 81-year-old Moe Laberge, like so many people, was not sure what to do with his free time.

The Alberta Beach resident got the idea to use some of the material he had lying around his house to build a birdhouse.

Leberge enjoyed the experience so much he decided to build another … then another and another, until eventually his garage was filled with 200 birdhouses.

Laberge turned his newfound hobby into a worthy cause. He came up with the idea of selling his birdhouses and donating the money to the Stollery Children’s Hospital.

After Global News aired his story, he was flooded with requests for the creations and quickly sold out.

We recently checked in with Laberge, who said since May he’s raised about $7,100 for the Stollery. The senior is still going strong, putting in several hours of work a day.

The passion project has become a community affair, with neighbours helping him cut wood and paint the finished product. Strangers have even dropped off supplies.

Last winter, an Edmonton senior who lost her husband of more than 60 years shared her story of love.

Allan and Pauline Oliver were married for 64 years. Together they had four children, who brought them several grandchildren and even a great-grandchild.

Life was going well until a COVID-19 outbreak at their continuing care facility in Edmonton. Both caught the disease. Pauline survived, but Allan died.

Through their entire marriage, Allan wrote Pauline love letters and poems. It was a gesture of love he continued until his last day, painstakingly writing her one final note.

Pauline says she didn’t know about the card until she found it on the day of his funeral — a time when his last words to his wife came when she needed them most.

1:57
Edmonton senior finds love letter from husband after he passes from COVID-19

Edmonton senior finds love letter from husband after he passes from COVID-19 – Feb 14, 2021

Mildred Berry is 105. Her sister, Roena Johnson, is 101. Together, they are an example of family connection and tradition — even when the pandemic has kept them physically apart.

The last time the elderly sisters saw each other in person was five years ago at Berry’s 100th birthday celebration.

The sisters live a couple of provinces apart, but after all these years, they have still stayed in touch. They talk on the phone nearly every day.

Their hearing may have weakened, but the sisterly bond between the two is as strong as ever — and their memories are still as sharp as a tack.

They spoke with Global News in November about how they stay connected.

From Alberta to Australia: Golf ball turns up on the other side of the world

Nobody knows when or how, but somehow a golf ball from Alberta went on what could be the world’s longest drive — to a remote island on the northeast coast of Australia.

It was discovered by Robert Annesley, 49, who was on a road trip to hike the entire continent of Australia with his wife when he found the Alberta golf ball.

Annesley made the discovery during a hike on Hinchinbrook Island, a national park in the northeastern Australia state of Queensland.

Hinchinbrook Island is an uninhabited area that can only be reached by boat, driven by a park ranger. Yet somehow, one of those Cougar Creek range balls went on the world’s longest drive — 12,250 kilometres.

From Alberta to Australia: Golf ball turns up on the other side of the world

When Annesley found it, he went searching to find out where Cougar Creek Golf Resort was.

That’s how he tracked down Jake Behiels, a golf pro and general manager at Cougar Creek, about 45 minutes west of Edmonton on Highway 16.

The two exchanged emails about the discovery. Two months later, they were formally introduced face-to-face during a video call with Global Edmonton sports reporter John Sexsmith.

Even more remarkable is the resiliency of the ball: Behiels doesn’t know the brand, but he estimates it could be 15 years old.

2:35
From Alberta to Australia: golf ball turns up on the other side of the world

From Alberta to Australia: golf ball turns up on the other side of the world – May 5, 2021