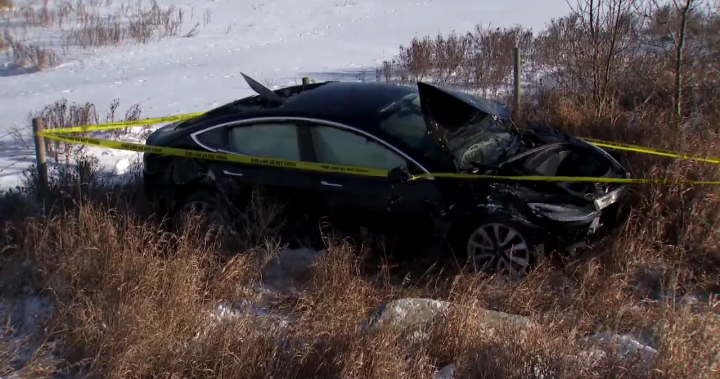 Calgarians dreaming of a white Christmas may have to brace themselves for a nightmare on the city’s roads.

“Please drive for the conditions, slow down and leave extra space,” police wrote on Twitter.

“If you are planning on celebrating with loved ones, #planahead and #drivesober.”

Winter Driving Advisory: Icy roadways have developed. Please drive for the conditions, slow down and leave extra space. If you are planning on celebrating with loved ones, #planahead and #drivesober.

Earlier in the afternoon, a pair of vehicles collided at Symons Valley Road and 144 Avenue N.W. and one slid off the road, flipping into the ditch. Eastbound lanes of 144 Avenue N.W. were blocked as emergency crews responded.

AHS EMS told Global News there were minor injuries and the driver was being transported to hospital with non-life threatening injuries.

On Thursday evening, that overpass was closed for a period of time.

A collision on Bow Trail east of Sarcee Trail S.W. affected lanes in both directions.

According to Environment and Climate Change Canada, Calgary got 6.7 cm of snow on Thursday.

“Our crews are focused on plowing through-lanes and applying abrasives to the road to help improve traction,” roads department spokesperson Chris McGeachy said. “At these low temperatures, salt becomes ineffective.”

Between noon and midnight on Thursday, CPS responded to 120 collisions, with injuries in nine of those incidents.