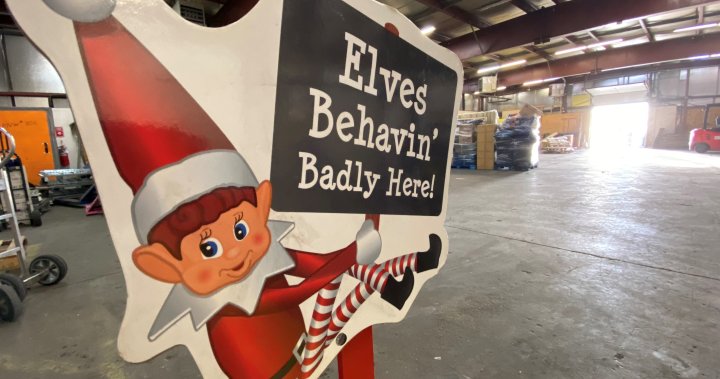 Two cardboard boxes sit on a pallet in a warehouse in northwest Edmonton, addressed to a family west of the city in Evansburg.

They were sent from Whitehorse. The electronic display on the nearby scale says they weigh 68 pounds.

But for this particular shipment, the sender paid nothing.

For at least the past 25 years, the company has been providing free shipping for people who want to send Christmas presents to family members or friends between the two cities, setting aside space on each trailer as needed.

“I try not to stick anything in the cab with the drivers,” joked McRobb.

It’s a tradition started by McRobb’s late father and company founder Ron McRobb, though no one can remember the exact year.

“I think he wanted to help somebody less fortunate who couldn’t really afford shipping,” McRobb said of his dad.

“At the beginning, it was only a couple people who would ship up stuff, but now it’s probably 50 to 100 people.”

Shipping parcels by ground to northern or remote cities, especially at Christmas time, is costly and can take multiple days or even weeks. Pacific Northwest gets packages to their destination in less than 48 hours.

“(Customers) get their wallet out, ready to pay, and we’re like, ‘No, no, it’s free,’ and they get so excited,” said office manager Tamie Littlechilds.

“I just get so excited wrapping everything and I don’t have to worry about how much it weighs,” Karba said.

This year was especially important for Karba. She shipped a Christmas gift to her father, who lives in a seniors home in Whitehorse.

Normally, customers would pick up their presents at the company’s warehouse in the northern city, but Karba said they delivered it straight to him.

“He was overwhelmed. He was touched that it had arrived at his facility,” Karba said.

Some people have been bringing gifts to ship for upwards of 15 years, and McRobb said being able to cover an otherwise costly postage bill is rewarding.

“It means the grandparents down here, on a fixed income, can get presents to their grandkids,” McRobb said. “You can see (the appreciation) in the smile on their face and that makes my Christmas a little bit better.

“I will keep (the tradition) going as long as I’m here.”