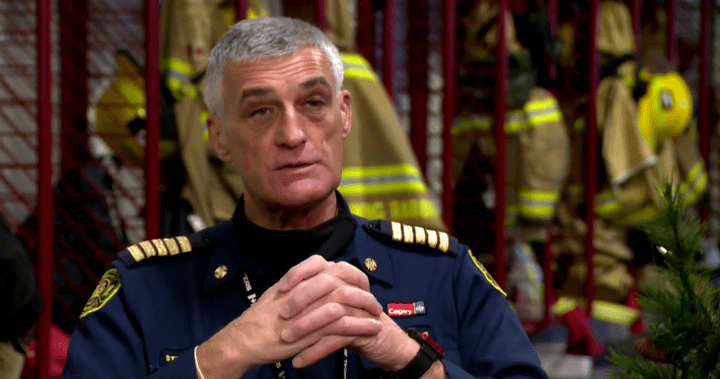 It’s been busy being a firefighter in Calgary.

“We’ve seen about a 14-per cent year-over-year increase in call volume. It’s the busiest year in the history of the Calgary Fire Department,” CFD Chief Steve Dongworth said in a year-end interview with Global News.

According to data from the City of Calgary, CFD responses to overdose and poisoning calls increased by 58 per cent from 2020, opioid and fentanyl calls increased by 39 per cent, and Naloxone kit use on calls jumped by 49 per cent — or about 10 a day, the CFD chief said.

2021: A year in review with Calgary’s police chief

And pandemic or outbreak-related calls increased by 13 per cent, to 2,662 this year.

“The busy-ness itself just means that it’s exhausting, especially with some of the types of calls that we run,” Dongworth said. “But then there’s the psychological stress on top of that.”

1:43
‘We lost everything’: 11 people left homeless after fire at Calgary townhouse complex

‘We lost everything’: 11 people left homeless after fire at Calgary townhouse complex

The fire chief said of the 146 CFD members who have caught the coronavirus, he feels fortunate that none have died of COVID-19, unlike in other city’s fire departments.

“Our people, they live in the community. They live in a community that, during COVID, you haven’t been able to go do things that you would normally do, so you go home to an environment which is also impacted.

“This isn’t unique to firefighters. As with all of us, our life has been totally turned upside down.”

In order to keep firefighters safe, restrictions have been placed on fire stations for things like capacity, shifting, gym facilities, on-the-job training and added personal protective equipment for every call to prevent catching COVID-19 from someone in need of help from the fire department.

Changes to the 911 dispatch system have been something for CFD members to get used to, as well as increased incidents of code reds, where no AHS ambulance is available in the immediate area.

The Calgary Fire Department got a bit of reprieve this year in the form of a $10-million funding boost for more firefighters, as part of this year’s budget deliberations made by city council.

Dongworth said it is some relief to a department that has received new fire engines as new communities have been added to the city’s footprint, but assets like ladder trucks and rescue trucks have lagged.

“We run a very light and lean model. It’s worked over the years because of the commitment of our people, but it’s certainly something we need to (address) looking forward,” he said.

“There’s research as recent as something I saw the other day that suggests that having the correct staffing in your fire department has a big impact on firefighter safety as well as the safety of the community.”

Dongworth said the fire department has stepped up its training on how to interact with people experiencing homelessness.

“And we’re actually rolling out some more kind of awareness information right now, specifically around how do you deal with folks in encampments? Dongworth said. “What kind of resources are there that you can point those people towards?

“So rather than just dealing with the problem that presents itself, perhaps being more vested in finding solutions for some of these people.”

The fire chief said he was “extremely proud” of the work men and women of the Calgary Fire Department did in the past year, saying he continues to be concerned for their safety.

A recent “mayday” episode — in which a firefighter calls for help from their colleagues because they are injured, unaccounted for or lost in a fire — in the city’s southwest stands out for the fire chief.

“The focus becomes on getting that person out: going and searching for that person, getting them out of the property,” Dongworth said. “Even that is something that just the hairs on the back of your neck stand up.

“If there’s anything that keeps me awake at night it is the concern for the members, the front-line women and men who are out there day and night… often putting themselves potentially in harm’s way, taking care of the customers (Calgarians).”