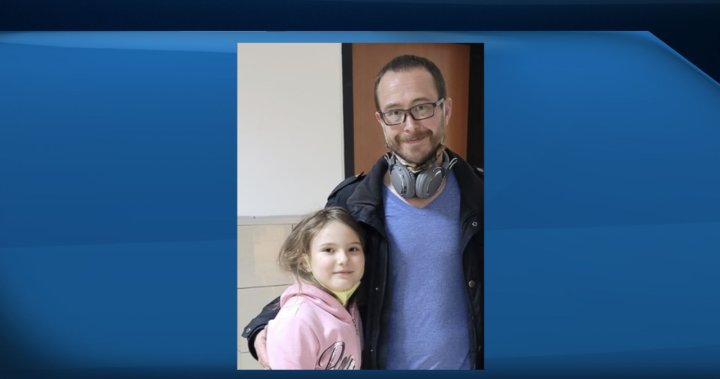 Six months after last seeing her, Calgarian Justin Coutts has been reunited with his eight-year-old daughter, Teaghan, on the other side of the globe.

“I feel like, finally, I’ve got my other piece of myself back.”

It was July 2 when he last saw her. She was scheduled to go with her grandparents on a nine-day trip to Ontario.

The grandparents later contacted Coutts, saying they were extending the visit.

Coutts later received information they travelled to Turkey and possibly Egypt where Mostafa Hassan, the girl’s grandfather, has citizenship.

Coutts has primary custody of Teaghan, but a court ruled her grandparents Louanne Bass-Hassan and Mostafa Hassan are allowed time with her.

Calgary police confirmed that on July 8, Coutts’ daughter was allegedly abducted by her grandparents and taken to Turkey without her father’s permission and contrary to a court order.

“The Calgary Police Service will continue to work with several national and international agencies to hold the girl’s grandparents accountable.”

2:05
Calgary father ramps up efforts to find daughter allegedly abducted by her grandparents

Coutts flew to Turkey in September, the same month as his daughter’s birthday.

“That’s actually one of the major reasons why I chose September to come over here,” he told Global News. “I just wanted to be closer to her, whether it be in the same country or at least on that side of the planet with her for her birthday.”

He landed first in Istanbul, speaking with police and judicial authorities, and then went to Turkey’s capital, Ankara.

After a mid-October return to Canada, Coutts headed back to Turkey and at the beginning of December, heard from the grandparents via a Turkish judge.

“I believe it was the prosecuting judge who had actually requested a meeting with them and asked them to come in, give a statement so that they could work on a peaceful resolution,” Coutts said from Ankara.

The father said the “main play” from the Turkish government and courts was to find a peaceful resolution to the matter.

“In the end, they did. We were able to take any information that they had, they sent it through to the Canadian central authorities at which time I was sent the letter and I immediately flew over again and landed here to start negotiations, or at least make contact to try and work this out with them.”

The first time Coutts saw his daughter following the six-month ordeal was just outside of a courthouse in the Turkish resort city of Antalya.

“We had requested that the court system was the one to handle it… So the judges and everybody in Turkey had brought us into the judge’s chambers to do the exchange and then have Teaghan put into my custody,” Coutts said.

The father wishes the saga could have played out a different way.

“However, at this point, I’m just glad to have my daughter back, and that’s really all I’m concerned about.”

“She’s her bright, bubbly self.”

The Canadian government is working on getting Coutts and his daughter a special passport for return to Canadian soil, he said. They expect to be back in Canada in early 2022, with a welcome return to normal.

“I most look forward to just being a parent again,” Coutts said. “I miss, you know, getting up in the morning and getting ready for school, getting (her) on the bus.

“The day-to-day routine is something that I need to know. Every person has their routine and structure, and without it, it’s difficult.”