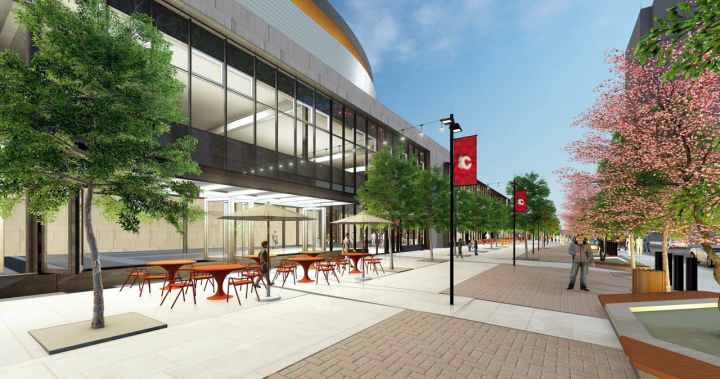 Calgarians are getting a clearer picture of why the deal between the City of Calgary and the Calgary Sports and Entertainment Corporation (CSEC) for the new Event Centre project fell through.

Ground was expected to break in January 2022 on the new event centre. However, Tuesday evening Calgary’s mayor Jyoti Gondek broke the news on Twitter the two sides have hit an impasse.

In a news conference that evening Mayor Gondek explained a phone call with Flames co-owner Murray Edwards, in which he expressed concerns over-inflating costs.

The CSEC released a statement later Tuesday night which included their concerns with what the organization called the introduction of new infrastructure and climate costs, “that were introduced by the City following our July agreement.”
Both Gondek along with the CSEC president and CEO John Bean held back-to-back press conferences on Wednesday to address those costs.

Bean said both sides are in “mutual alignment” when it comes to wanting to build an event centre, but “where the rubber hits the road is in who’s going to pay for what.”

The CSEC cited inflation as well as supply chain issues as contributing factors to the increasing costs of the project and said the price tag had ballooned to $634-million and does not include infrastructure and climate mitigation costs — something Bean thinks should not be the responsibility of the CSEC.

“This isn’t us looking for a way out,” Bean told reporters.

“We genuinely believe the right of way costs and the climate, notwithstanding they were on the table, really should not be to the account of CSEC.”

Back in July, the cost of the event centre was pegged at $608 million, an increase from the original cost estimates of $550 million.

In a second press conference Wednesday afternoon, Gondek began by addressing what she called “a lot of questions around the costs and where they came from”.

The mayor made a point of stating the city believes their expectations were “clearly outlined,” and “reviewed extensively by multiple groups” and that the expectations for this project “were no different than any other project” when it comes to energy efficiency, climate mitigation and infrastructure.

Gondek said since the announcement Tuesday, the city has been asked whether they are “insisting on some of these improvements” that come attached with the costs of the project.

Both the climate mitigation and infrastructure costs were included as conditions as part of the approval of the development permit for the building at Calgary Planning Commission (CPC) last month.

“Absolutely. We are insisting on things like sidewalks … because you need them for a good public realm experience.”

Those additional costs were expected to be $16.7 million, with the city requesting CSEC to cover around $10 million.

The mayor was asked to break down the climate mitigation components and she explained these costs included $3.8-million for photovoltaic (PV) layering — which she said is essentially a film that is placed on the roof so there is the option to add solar panels in the future.

Gondek refuted the argument that some of the climate expectations were recently brought in by her council.

“In December 2020 it was very clear that the renewable and low carbon energy feasibility study was a requirement.”

“So a year ago the applicant knew that this was a requirement.”

Gondek said over the course of the year since then, there have been similar conversations around the energy efficiencies and climate mitigation expectations of this project including assessments and studies that were shared in mid-October.

“We did not get elected as a new council until October 18. So it was well known to CSEC what the climate mitigation expectations were on this project well before this council was ever formed.”

Ward 7 councillor Terry Wong and Ward 5 councillor Raj Dhaliwal sit as members of the CPC and were a part of the discussions in November leading up to the approval of the development permit, which included a list of more than 70 pre-approval conditions.

On Wednesday, Wong said the cost concerns that have come up recently were items that had been discussed by all parties during the course of negotiations.

“Nothing you hear today was new before the planning commission.”

The Ward 7 councillor said all parties were asked multiple times whether they needed any further clarification or if there were any concerns that needed to be addressed and nothing was brought up.

“CSEC was, as an applicant, very supportive of that, (PV layering) and they wanted to install PV layering on 60 per cent of the rooftop,” Dhaliwal explained.

“They were boasting about it.”

Dhaliwal said “the applicant” also brought the 2035 carbon emission deadline to the CPC and told the commission, “we will be ahead of the city of Calgary when it comes to net zero.”

Mayor Gondek said part of her conversations with CSEC included an offer for the city to help source out funding from the province and the federal government for the future purchase of solar panels. And that at this time the only cost for that portion of the project would be $3.8-million so that the PV layering could be installed.

The latest dilemma between the City of Calgary and Flames ownership comes months after the deal for the event centre was restructured to help cover increased costs.

It was revealed the city would not be able to cover its half of the costs, and both sides agreed to contribute an additional $12.5M

As part of those negotiations, CSEC agreed to fund a disproportioned share of the newly costed building at $321 million with the City of Calgary’s costs pegged at $307 million — which included the demolition of the Saddledome, flood mitigation and event management plans.

Calgary Municipal Land Corporation was removed as the development manager and CSEC agreed to cover any additional cost overruns.

According to the mayor, the agreement stated Thursday was the final day for both sides to pull out of the deal; which CSEC opted to do.

Ultimately, Gondek said there’s disappointment the situation between both sides has reached this point, but said she is open to further discussions to reach a solution.

“It’s an unreal sense of loss right now,” Gondek said. “So if there is a desire to come forward with those funds on behalf of CSEC, we’re happy to listen.”

Bean said CSEC has had several conversations with Gondek in which she “expressed desire to see the event centre built.”

The collapse of the deal was disappointing for Flames fans as well.

“Both sides need to get something figured out here because we’ve been through this so many times,” Adler said.

“Let’s hope both sides can get a deal done, and let’s make something happen here.”

For Ryan Gauthier, an associate professor at TRU Law in Kamloops B.C, the arena deal falling through at the last minute came as a surprise.

Gauthier studies law related to sports and said he wondered why both sides didn’t seek mediation or arbitration prior to walking away from the project.

“If there’s a dispute over defining the terms or who pays what, that sounds to me like a mediation or arbitration thing, not a tear up your stadium agreement type of thing,” Gauthier said. “That sounds very, very odd.”

In the meantime, the Calgary Flames plan to stay and play at the Saddledome “for many years to come.”