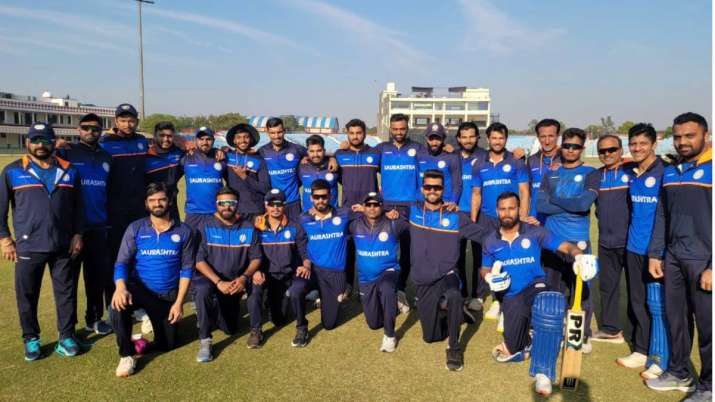 Saurashtra put an all-round performance against Vidarbha, thrashing the Maharashtra side by seven wickets to reach the semifinals of the Vijay Hazare Trophy here on Wednesday.

First, Saurashtra bowlers led by skipper Jaydev Unadkat (2/25) dished out a clinical show and bundled out the opposition for a paltry 150 in 40.3 overs, despite Apoorv Wankhede’s hard-fought 72.

They then rode on Prerak Mankad’s gusty unbeaten 77 off 72 balls to chase the target with 20.1 overs to spare despite a top-order failure.

Put into bat at the Sawai Mansingh Stadium, Vidarbha lost their first three batters inside the first eight overs as Unadkat and young speedster Chetan Sakariya (1/12) wreaked havoc.
Vidarbha lost in-form opener Atharva Taide (1), who became Unadkat’s first scalp. Ganesh Satish (1) and Yash Rathod (1) also faltered cheaply.
Then skipper Faiz Fazal (23) and wicket-keeper bater Akshay Wadkar (18) tried to rally the innings with their 45-run stand for the fourth wicket.
But it was medium-pacer Prerak Mankad (1/22), who broke the stand after cleaning up Wadkar, to leave them reeling at 54/4.
Vidarbha lost half their side for 66. Only Apoorva Wankhede, who hammered five boundaries and as many maximums, showed mettle and hit a quick-fire 72 off 69 balls, but was devoid of partners in the crunch game as Saurashtra bowlers bowled in the right areas.
Aditya Sarwate (14), Lalit Yadav (1), Yash Thakur (0) and last man Aditya Thakare (0) made a beeline to the pavilion.
Mankad, medium-pacer Chirag Jani (2/34), seasoned left-arm orthodox spinner Dharmendrasinh Jadeja (2/34) and leg-spinner Yuvraj Chudasama (2/15) played their parts to perfection.
Chasing 151, Saurashtra lost openers Vishwaraj Jadeja (0) and Harvik Desai (9) early as pacer Aditya Thakare (2/13) struck twice inside the first five overs.
Then Sheldon Jackson and Mankad tried to steady the ship but were able to add only 22 runs for the third wicket.
But Mankad and Arpit Vasavada (41 not out) had other plans. The duo not only pulled the team out of trouble by forging unbroken 116 runs for the fourth wicket but also sealed the game for Saurashtra.
While Mankad hammered 10 elegant boundaries and two maximums, Vasavada hit six fours.
Saurashtra faces Tamil Nadu in the semifinal on Friday.
Brief Scores: Vidarbha 150 all out (Apoorv Wankhede 72, Faiz Fazal 23; Yuvraj Chudasma 2/15, Jaydev Unadkat 2/25) lost to Saurashtra 151/3 (Prerak Mankad 77 not out, Arpit Vasavada 41 not out; Aditya Thakare 2/13) by seven wickets.