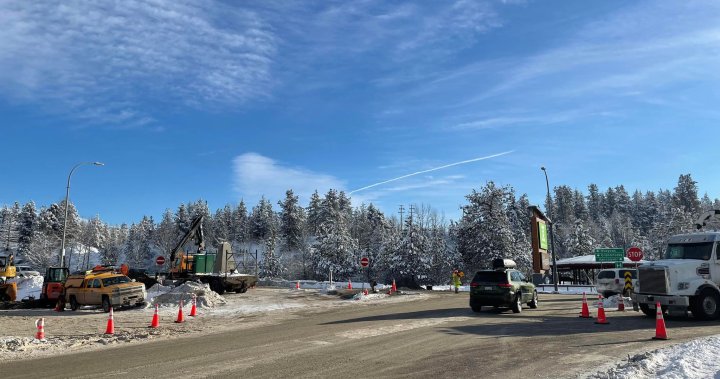 Traffic in Princeton, B.C., will soon flow in a much safer way as two new traffic lights are being installed at key intersections in town.

Princeton Mayor Spencer Coyne posted a live video to his Facebook back in August expressing his frustration with the province, asking for a traffic control solution.

“We have been asking for traffic control on this highway for 20 years,” Coyne said.

“When they redirected everyone through here, I strongly asked that they come up with a solution quickly that would be long term, and not just a short-term fix. I am very grateful that they listened to us.”

1:07
Princeton mayor frustrated with lack of help from province

Princeton mayor frustrated with lack of help from province – Aug 17, 2021

Right-turn lanes and lighting along the highway will accompany the new traffic lights, which Coyne says “will make this intersection a lot safer.”

The project is being moved ahead on an accelerated timeline to support the increased traffic along Highway 3, which re-opened to regular passenger vehicles on Tuesday.

“For people living in and around Princeton, and all of our highway travelers, the last month has been difficult to say the least,” said MLA for Boundary-Similkameen, Roly Russell, in a press release.

“Our government has been working as quickly as we can to keep people safe, and I want to thank Mayor Coyne for his advocacy and eagerness to work together to do exactly that.”

Coyne is urging travellers to driver slowly and with ease on highways and in town.

“Be respectful. Respect our clerks and our flaggers and drive the speed limit please,” he said.

“If you are coming into the downtown core please stay out of the evacuated areas.”

The new stoplight at Highway 5A and Highway 3 is expected to be operational by the end of the week and the traffic light at Tapton Avenue should be completed early in January.

The project budget is $1.3 million.

0:22
Reckless B.C. driver travels on the wrong side of Highway 3

Reckless B.C. driver travels on the wrong side of Highway 3