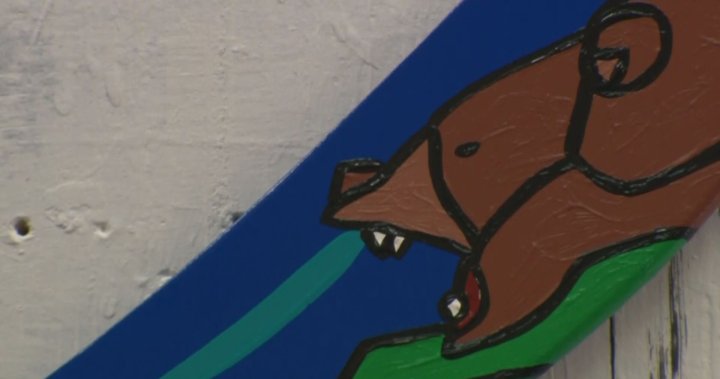 Six months ago, Jason Carter was going through his emails when he almost deleted an opportunity of a life time.

“There was this email from Hockey Canada that I thought was a spam, but as I looked a little closer I noticed it was legitimate,” Carter said.

It was a good thing he took that time to look a little closer. Hockey Canada asked if he would be interested in creating awards for the player of the game award at the IIHF World Junior Hockey Championship.

“It really means a lot to me as an artist to share my work, as well to a broad audience,” Carter said.

Carter was tasked with hand-painting 150 hockey stick bases. He wanted to create an empowering design and has always been to bears and their meaning. The grizzly bear he picked is talking to the northern lights.

“I was trying to capture a feeling of that moment of triumph winning player of the game.”

While the players trained for the championship, Carter put in his own long hours, painting for more than 12 hours a day for three weeks.

“Painting these sticks was a real chore,” Carter chuckled. “In the sense I didn’t realize how much work it was going to be just the prep the dang thing.”

Carter had to sand the base of every stick down and then paint a base coat. He picked blue and it took multiple layers.

“It was a huge process.”

When Carter started painting, he said the biggest challenge was the teeth.

“I love painting big and in scale, so that was the biggest challenge.”

As the days went on and as Carter kept painting sticks, he said he started to think about the players who will receive them and how much that mean to them.

That perseverance is shared not just with the players, but also the artist behind the awards.

Most of the pre-tournament games were cancelled due to the COVID-19 pandemic. Team Canada will only play on December 23.