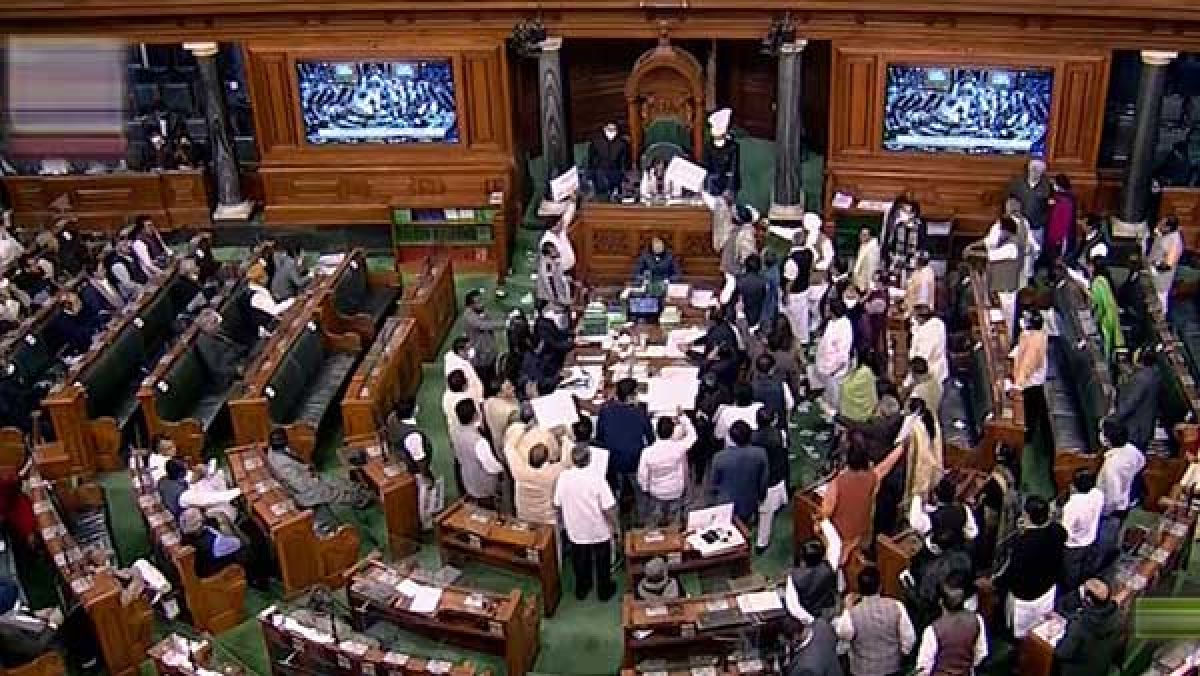 New Delhi, Dec 20: Proceedings in both Lok Sabha and Rajya Sabha on Monday were adjourned several times as they targeted the government on several issues. All through the Winter Session, the leaders from the Opposition parties in Rajya Sabha have refused to take part in the debates till the suspensions on 12 MPs are revoked, while the leaders in Lok Sabha created ruckus over a few issues including Lakhimpur Kheri incident.

To end the deadlock, the government had called a meeting with four parties, but the Opposition questioned why only four parties were invited for the meeting. Amid the chaos, the government passed the Election Laws (Amendment) Bill in Lok Sabha. Check out the major developments of the day:

Parliament passes NDPS (Amendment) Bill
Parliament passed a bill to rectify errors that had crept into the Narcotic Drugs and Psychotropic Substances Act, with Rajya Sabha giving its nod to it on Monday. The Narcotics Drugs and Psychotropic Substances (Amendment) Bill-2021 was passed by Lok Sabha on December 13. Moving the bill in the Upper House for its consideration and passage, Finance Minister Nirmala Sitharaman said it replaces the ordinance which was promulgated in September this year as Parliament was not in session then. Rajya Sabha passed the bill by a voice vote.

“A total of 5,601 instances of ceasefire violations were reported along the LoC under the operational control of Indian Army in Jammu and Kashmir from November 30, 2019, to November 29, 2021,” he said. Bhatt said “substantial damage” was inflicted on Pakistani posts and personnel during retaliation by the Indian Army.

Jaya Bachchan curses BJP with ‘bad days’ after objecting to ‘personal’ remarks in RS
Upset over alleged “personal” remarks made against her, Samajwadi Party MP Jaya Bachchan on Monday lashed out at the ruling BJP in Rajya Sabha with a “curse” that it will face bad days. An agitated Bachchan also told the chair that he should be fair and alleged that an attempt was being made to stifle the voice of opposition.

Participating in the debate on NDPS (Amendment) Bill, Bachchan chose to raise the issue of the 12 suspended opposition members and said Bhubaneswar Kalita, who was in the chair, himself used to protest in the Well of the House. This evoked a sharp reaction from BJP members. “I don’t want to thank you because I don’t know whether I should remember when you used to walk into the Well shouting…or today when you are sitting in the chair,” she said when called to speak on the bill.

Objecting to her remarks, Rakesh Sinha (BJP) said she was casting aspersions on the chair. But Bachchan continued her speech and lamented that at a time when the country is facing several important issues, the House has allocated 3-4 hours for a debate on rectifying a “clerical error” in the Bill.

Amid the din, she alleged that personal remarks were made against her and sought protection from the chair. “I expect you to take action on the comment he made on me and my career. You want to be fair. You are sitting on the chair, you don’t belong to any party, sir,” she said. “How can they make personal remarks in the House…Aap logon kay buraey din aayengay (Your bad days will come), I curse you,” she said.

Lok Sabha on Monday passed a bill to link electoral roll data with Aadhaar eco system amid protest by opposition members over the Lakhimpur Kheri violence issue. The Election Laws (Amendment) Bill 2021, piloted by Law Minister Kiren Rijiju, was passed by a voice vote after a brief discussion during which some opposition members demanded that it be referred to a parliamentary panel.

The bill seeks to allow electoral registration officers to seek the Aadhaar number of people who want to register as voters “for the purpose of establishing the identity”.

However, the opposition parties led by Congress opposed the bill, saying it will infringe on the fundamental rights of citizens. Opposing the bill, Congress leader in the Lok Sabha Adhir Ranjan Chowdhury demanded that the bill must be sent to the standing committee concerned for scrutiny. He claimed that the bill will curb the people’s personal liberty.

“We don’t have the data protection laws. You can’t bulldoze such a bill on people,” he said.
Chowdhury’s party colleague Manish Tewari said voting is a legal right and it is beyond the legislative competence of the Aadhaar Act to be linked with the electoral laws. Tiwari also claimed that the bill violates the Supreme Court judgement on Justice (retd) K S Puttaswamy case.

Lok Sabha on Monday cleared the second batch of Supplementary Demands for Grants authorising the government to spend an additional Rs 3.73 lakh crore during the current fiscal amid protest by the opposition over various issues. The extra spending includes infusing over Rs 62,000 crore into the company that holds residual assets and liabilities of Air India, Rs 58,430 crore by way of additional fertiliser subsidy, Rs 53,123 crore towards payment of pending export incentives and Rs 22,039 crore to rural development ministry for transfer to National Rural Employment Guarantee Fund.

The Lok Sabha on Monday referred the Biological Diversity Bill to a Joint Committee of both houses of Parliament.

Environment Minister Bhupendra Yadav moved the motion to refer the Bill to the Joint Committee with 21 members of the Lok Sabha and 10 members from the Rajya Sabha.

The Committee is expected to submit its report to the House by the last day of the first week of the next session.

The government subsequently moved the Bill for further consideration into the Parliamentary Standing Committee on Law and Justice on demand of the Opposition parties. The Bill also seeks for resolution of disputes, commercial or otherwise, enforce mediated settlement agreements, provide for a body for the registration of mediators. The purpose of the Bill is to encourage community mediation and to make online mediation an acceptable and cost-effective process.

Prime Minister Narendra Modi held a meeting with senior ministers of his government in Parliament on Monday to discuss various issues and the further strategy for the ongoing winter session. Union Ministers including Rajnath Singh, Nirmala Sitharaman, Piyush Goyal, Narendra Singh Tomar, Kiren Rijiju and others were present in the meeting. Agencies