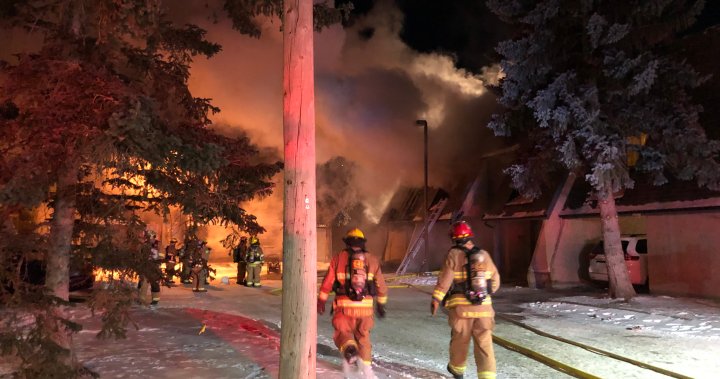 At least 11 people were forced out of their homes, some of which are now destroyed, after a fire broke out in a northwest Calgary townhouse early Tuesday morning.

The Calgary Fire Department was called just before 4 a.m. to a housing complex at 4527 Montgomery Ave. N.W.

District chief Gill Iland said the fire started at one of the four townhomes that make up the building, before the flames spread across the roof to the two units beside it.

Firefighters managed to stop the fire before it reached the fourth home, Iland said.

Iland said three of the units are writeoffs, and the other suffered extensive smoke damage.

No one was injured in the fire but 11 people were evacuated and are now receiving assistance from the Canadian Red Cross.

Calgary Transit buses were brought in to keep people warm.

The cause of the fire is not yet known.