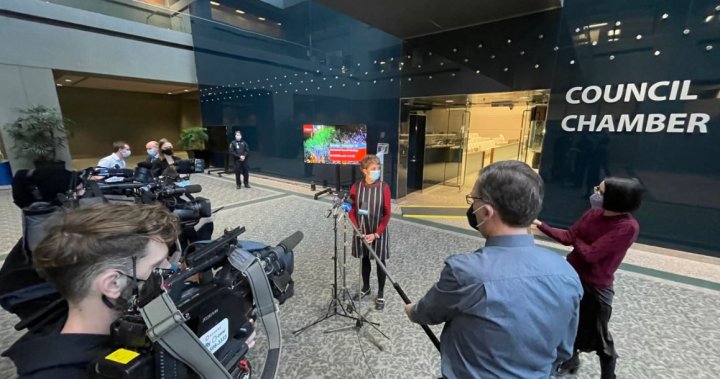 Calgary will not be bringing forward funding for a legal challenge against Quebec’s Bill 21 as the city joins other municipalities in a call-to-action to condemn the legislation.

Last week, Calgary’s mayor said city council would debate an urgent notice of motion to join their colleagues in other Canadian cities to challenge the legislation that bans public employees, including teachers, in Quebec from wearing religious symbols  like turbans and hijabs in the workplace.

Brampton, Ont., Mayor Patrick Brown called the legislation discriminatory and said freedom of religion is a fundamental principle that must be upheld.

Brown called on other cities to get involved, as his council voted to put forward $100,000 towards a legal challenge of the legislation.

2:16
Protest held in Montreal in support of Quebec teacher reassigned over hijab

However, the notice of motion brought forward by six city councillors and Mayor Gondek does not include financial support.

The motion calls on council to endorse the current legal challenge against Bill 21 by the National Council of Canadian Muslims (NCCM), the World Sikh Organization of Canada (WSO) and the Canadian Civil Liberties Association.

It also calls on council to convene a task force led by Councillors Jasmine Mian, Raj Dhaliwal and Evan Spencer to engage with local legal and religious communities to determine what resources the city could provide to the legal challenge or to “local inclusivity initiatives.”

According to the notice of motion, a report would be required early in 2022 which could recommend funding from council.

“We took up that challenge and we have come up with a different solution that is actually much more inclusive of the communities that we’ve engaged with,” Gondek told reporters.

“We’ve had a lot of organizations say to us ‘Just give us some time in January and let’s make sure that we’ve got this right.’”

When asked whether the omission of financial support in the notice of motion should be characterized as a step back or a pivot, Gondek said the move gives council a better opportunity to consult before taking action against the legislation.

“The point is to make sure as a city, not just the corporation, we are sending a clear message that we do not accept Bill 21 and that we endorse the legal challenge that has been offered,” Gondek said. “Where the money comes from is still something that remains to be seen.”

5:40
Trudeau comments on Quebec teacher reassigned due to her hijab as result of Bill 21

Trudeau comments on Quebec teacher reassigned due to her hijab as result of Bill 21 – Dec 13, 2021

While several councillors are against Bill 21, whether or not taxpayer dollars should be used in the effort was a point of contention for some, including Ward 10 Coun. Andre Chabot.

Chabot told reporters his office has fielded calls from residents who are “vehemently” opposed to the use of taxpayer dollars for the legal challenge.

“I personally don’t agree with their legislation, but it’s not within my authority to allocate property tax dollars to support anything that’s external of our city,” he said.

Calgary city council has already passed a notice of motion that took a public stance against Bill 21 back in 2019.

For the NCCM, the endorsement of the legal challenge against the legislation is welcomed.

“Calgary is the third most diverse city in Canada and is adamant in continuing to support a future where everyone has access to opportunity and prosperity,” an NCCM spokesperson said in a statement to Global News.

“The City of Calgary’s endorsement of the current legal challenge of this discriminatory bill assures that they will not let their residents down.”

Gondek said it is key for municipalities to step up and be vocal against Bill 21.

“I think it’s absolutely critical for all municipalities to weigh in on this,” Gondek said. “As an order of government that’s closest to our people, we need to send a clear message that racist bills will not be tolerated.”

City council will debate the notice of motion Monday evening.