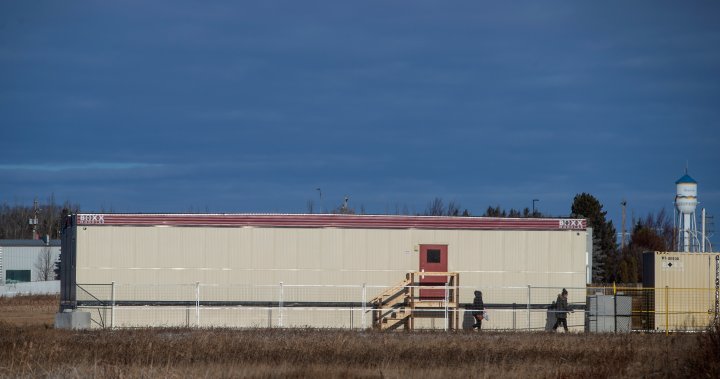 A tent lies mangled on a pile of soot where a fire burned down part of a homeless encampment in a central Alberta city.

Marsha Louis, who lives in one of the remaining tents held up by shards of wood and covered in tarps, says the only item that survived the fire was a ceramic angel.

The winged ornament sits on top of wooden crates that act as a wind barrier. Louis calls it their guardian angel.

As the sun disappears beyond the horizon on a cold December night, Louis says it’s a struggle to keep warm in Wetaskiwin‘s “tent city.” Freezing rain has also turned the area into an ice rink.

About 25 people currently live at the camp in Wetaskiwin, southeast of Edmonton.

Across a snow-covered field to the camp’s northeast, a warming shelter recently opened. Temporary trailers sleep up to 25. While some are using the new space, others like Louis are choosing to stay in the camp.

“They told us to go over there, but my friend’s in a wheelchair and my common-law (partner) can’t really walk. They have no ramp for a wheelchair,” says Louis.

“I’d rather stay here… I just worry about the other people around.”

The camp started up in August after the city forced the closure of its only homeless shelter. It moved clients to a city-owned plot of land behind a Walmart.

An outreach group said up to 60 people were living there in the camp in October. Some have left for nearby cities, including Edmonton, where more supports are available. Others haven’t been seen in weeks, and several agency workers have said they are unsure what happened to them.

On the December evening, fires crackle throughout the camp. Portable washrooms are soiled and there are no lights or handwashing stations. The temperature dips to -10 C.

The warming site, run by the non-profit Mustard Seed organization, is open from 3:30 p.m. to 9:30 p.m. daily, with plans to expand around the clock. No alcohol or drug use is allowed on the property and space is limited for people’s belongings.

Francis Lee Thom says it’s worth the risk to keep his possessions at the camp while he uses the shelter. He calls it a “saviour of his life.”

“I don’t want to die in a tent,” says Thom. “When the temperature is dropping, you fear for yourself. If you care about others, you fear for them.”

He says he’s thankful for the place to sleep, but wishes there were real beds and more food options.

Craig Haavaldsen, who runs the Rock Soup Greenhouse and Food Bank in Wetaskiwin, says neither the camp nor the warming shelter is sufficient.

There is no access to showers or laundry at either location, support is limited and the shelter’s entry rules are strict, says Haavaldsen. At the camp, he says people are preyed on by gangs.

“It’s just how inhumane this whole thing is. There’s no dignity in this,” he says. “They lost their counsellors, nurses, addictions therapists, doctors and it was replaced with a mat on the floor.”

Critics have slammed the City of Wetaskiwin for its contentious relationship with some outreach organizations and how it addresses the needs of the homeless population.

Deputy Mayor Gabrielle Blatz says she is aware of the concerns and council is trying to find solutions. As a smaller municipality, Wetaskiwin has funding and resource issues, she says.

‘Step up or shut up’: Wetaskiwin mayor frustrated over lack of help with homeless

The city is working with all levels of government, Alberta Health Services and experts on homelessness, she adds.

AHS deferred comment to the Alberta government, which says homelessness in Wetaskiwin is an ongoing concern for residents and city leadership.

Blatz says the city does not plan to remove the camp, and the warming shelter is “the best for what we have right now.”

Mustard Seed executive director Dean Kurpjuweit in Edmonton says the warming shelter has been operating at about half capacity since it opened earlier this month.

He says the agency is working with the nearby Samson Cree Nation to offer Indigenous supports and plans to make the site more accessible, but it must first build trust with the community.

Provincial funding for the temporary site is in place until March.

Kurpjuweit says he’s concerned any progress made with the population will be lost if a long-term solution is not found.

“We have to look systemically beyond the larger cities to these smaller centres and say ‘what are we doing there?”’