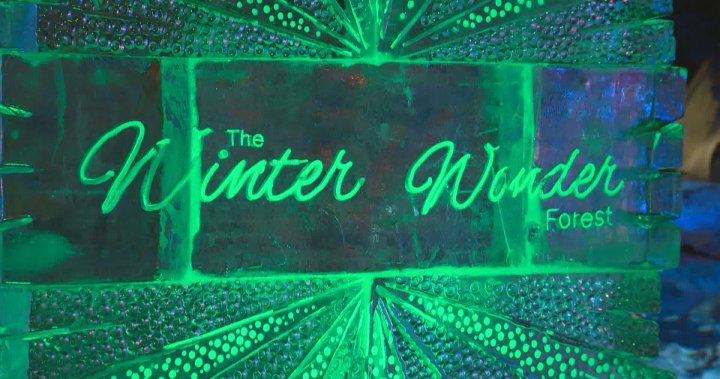 What was meant to be a magical stroll through a winter wonder forest quickly turned into a stressful situation for some Edmontonians.

This comes as people who bought tickets for the event which has since been cancelled, potentially won’t get their money back just days before Christmas.

For weeks Marnie Geddes and Will Martin were looking forward to the Winter Wonder Forest event in Gibbons, northeast of Edmonton but the day before their planned visit they got a surprise email.

“We were preparing to go, we spoke to kids about it and told them too that this was something happening and it was Friday evening that we got the email that it was being cancelled, so it was very last minute,” Geddes said.

Event organizers posted a notice of the cancellation online Friday. The notice said due to delays caused by harsh weather and a requirement to pay the full amount of rent for the season right away — which they couldn’t do — the event had to close.

“We never thought that we’d have to cancel this event, we didn’t expect mother nature to be this severe this year,” Winter Wonder Forest founder Steve Sande said.

The refund policy on the event’s website states “if our fundraiser is cancelled, you are eligible for a refund or a donation tax receipt.”

But now some people who pre-purchased tickets said they’re only being offered the tax receipt rather than a refund.

However, Sande said it’s still being sorted out.

“We’re basically offering everyone a tax deduction for their purchase of the event,” Sande said.

That’s not the response Geddes and Martin were expecting after they spent $120 for their family to attend.

“I’m like, well, I didn’t really donate any money, (even though) there was an option to donate money aside from purchasing tickets,” Geddes said.

“To make a donation is my choice, not being forced, your hand is being forced at this point to make that donation,” Martin said.

“We understand that most people don’t really want a tax receipt and they just want a refund and we have to wait till early next week to actually see if we can figure out another strategy to provide these people with the refund,” Sande explained.

A refund Geddes and Martin are waiting for.

“It’s a big chunk of change for me to be honest,” Geddes added.