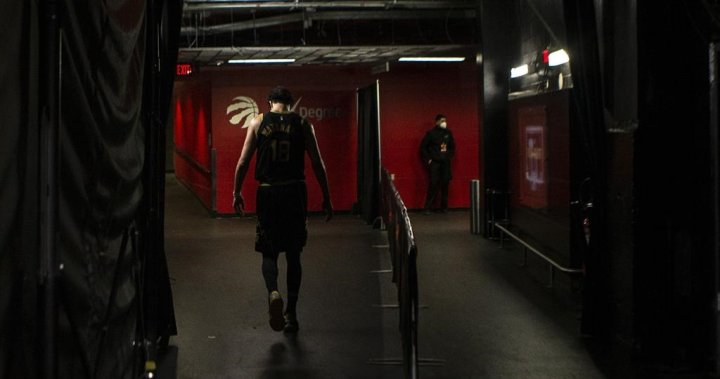 TORONTO – The Toronto Raptors have stopped practising as a team, instead working with coaches individually.

It’s a precautionary measure being introduced as Toronto’s game against Orlando on Monday night was postponed due to a COVID-19 outbreak on the Magic.

The Raptors have also been touched by the coronavirus. On Monday, the team added Gary Trent Jr. to the NBA’s protocol list, where he joins all-star forward Pascal Siakam and rookie Dalano Banton.

Toronto’s new practice regimen will feature just one player and one coach drilling at one net at a time.

There are six nets at the Raptors’ practice facility but a team spokesperson says they’ll likely limit practice to four of the hoops.

All players and team staff will be tested before entering the OVO Athletic Centre.

Toronto’s next game is Wednesday in Chicago.

Monday’s game against Orlando at Scotiabank Arena was one of several that the NBA postponed. Sunday’s games between Denver and Brooklyn, Cleveland and Atlanta and New Orleans and Philadelphia were postponed, while Tuesday’s game between the Wizards and Nets has also been scratched.

The Raptors are well-versed in COVID-19 challenges. The team suffered a major outbreak that impacted several key players and most of the coaching staff last March, and tumbled down the Eastern Conference standings during that time, missing the playoffs.

Team president Masai Ujiri also announced he had tested positive from his Giants of Africa event on Dec. 5. Forward Precious Achiuwa just returned to the lineup on Saturday after being in COVID protocol for 10 days due to a close contact.

This report by The Canadian Press was first published Dec. 20, 2021.