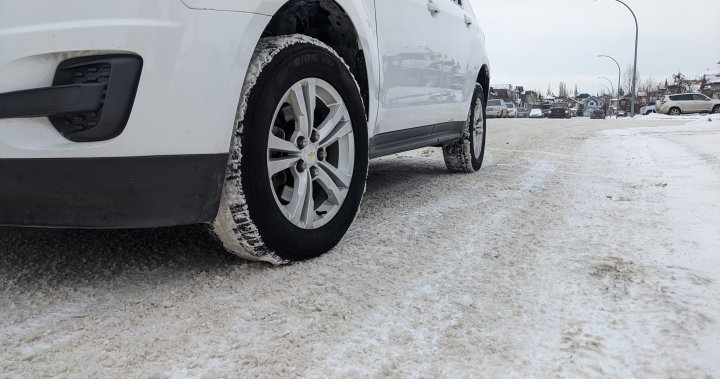 If you had to drive somewhere in Calgary on Saturday morning, chances are it was a bit slick.

Due to fluctuating temperatures, icy spots are quite likely. Calgary police closed down a portion of Crowfoot due to the slick roads.

In a morning tweet, just after 8 a.m., CPS said they closed northbound Crowchild Trail — between Memorial Drive and 17 Avenue S.W. — due to multiple collisions and adverse weather conditions.

By 11 a.m., police reopened that stretch of road. However, they still urged caution.

“Please continue to slow down, exercise caution and leave extra room between vehicles if you are out driving in (Calgary) today,” the tweet said.

City of Calgary crews are working on “trouble spots” including bridge decks, ramps and intersections on main routes.

Pickle mix, a salt and gravel mixture which sticks to the ice and helps with traction, is being used throughout the city as the temperature drops below minus 10.

The city also said its staff is working on removing snow and ice from the Priority 2 routes, which are roads with 5,000-19,999 vehicles per day, such as Kensington Road and Acadia Drive.

At this time, the City of Calgary doesn’t anticipate a need for snow-route parking bans.

Meanwhile, if you are travelling outside the city or returning to Calgary, you should be prepared for some backups.

A crash between two semis southbound on the Queen Elizabeth II highway near the Millet turn-off has detoured traffic. RCMP said crews continue to clean up the wreckage.

Crash on QEII near Millet closes down highway for several hours